…they started putting  bacon in mac and cheese, of course. Did you think I was going to make a really offensive Holocaust joke or something? Puh-leez.

I have been waiting for the day to write about how Jdate is the worst since I joined back in May. Now that my subscription has expired (PS-Up yours autorenew! You cannot con this Jew into parting with her hard-earned dollars in return for a Red Sea of NOTHINGNESS), and I’ve stopped seeing the guys I met on there, and I’ve caught up on all the episodes of New Girl I missed before the new season started, I can finally record the long -awaited rant that has been living in my head.

I can divide my hatred of Jdate into two categories.

1) Hideous graphics and homepage. First of all, remember Friendster? From the early 2000s? Or, as I like to call it, Myspace’s perverted uncle? Facebook’s annoying great grandmother? It was this really JV social networking site that people used in late high school and early college, and it looked something like this: 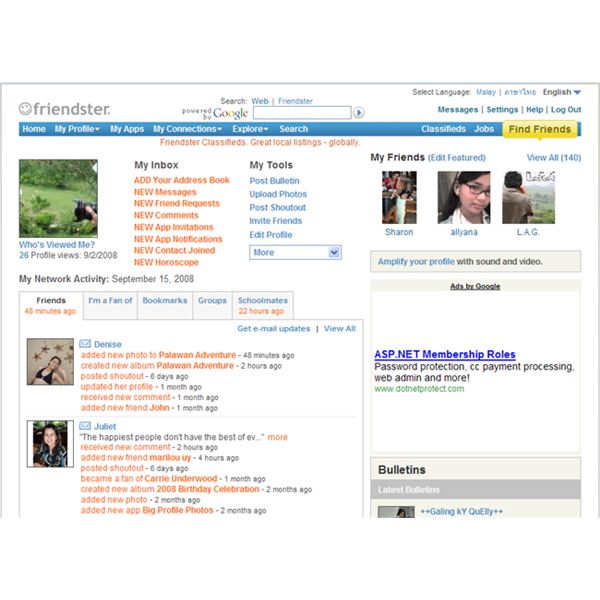 That, my friends, is what Jdate looks like now. Its homepage is a mishmash of small fonts, and confusing directions, and tiny, low quality pictures of Jews. I mean, if Jdate gets as lucky as Friendster, and is repurchased and flipped into a gaming site for Southeast Asians, then it should consider itself blessed. Because it looks like it was designed by two blind programmers over the age of 65, who have just discovered HTML for the first time. (Yes, I made a programming joke. Engineers, holler at me!)

2. Profile Nazis. Sorry/I’m not sorry about the inappropriate historical reference. Jdate brings it on themselves, by monitoring every single word you put on your profile like it’s a police state. You can’t make any changes to your profile, not even so much as correcting a typo or adding a comma, without receiving the following message.

(Disclaimer: I made this up and promptly deleted it so as not to give away real details about myself. I will say, this is a much cooler biography than my real one, so I was tempted to leave it up and see what happened.)

For godsakes Jdate! How many people work for Customer Care that you have the bandwidth to monitor every single update? (And, PS: I think you’d be MUCH better served investing in a few new software engineers to do a full site overhaul!) And what are you guys looking for any way? Veracity? Anti semitism? Pro Palestine propaganda? Tasteless Jewish jokes (well, look no further than this blog!). Newsflash, Jdate Customer Care, the NSA is watching everything we say already. I don’t need you to do it too.

3. Features that make no sense. I’ve been a pretty big fan of OKC’s approach to creating online dating profiles. A picture, a short bio written in response to some witty prompts, and answers to some revealing questions are PLENTY for me to decide if I’d like to go out with you or not. Jdate has the picture and profile thing down, but really misses the mark on other features that are intended to help users get to know each other. My personal least favorite? Something called Kibitz Corner. What is that, you ask? Well, this is what “kibitz” means:

Oh, my. What an attractive thing to do to someone you’re trying to woo! One of the first things I do on dates is try to offer the other party some unwelcome advice. (i.e. “Is that a mole? You should really see a dermatologist!”) I mean, honestly, can you think of anything less appealing than unwelcome advice from a stranger? (To be fair, I do dole out my share of unwelcome advice, but it’s to friends and family only.) But apparently Jdate thinks it will endear people to each other if they could all start bossing one another around before meeting in person. In reality, Kibitz corner is really a poor man’s OKC questions (Given the clientele of Jdate, I find it funny they’d do a “poor man’s”  anything! Ahahaha! Tastless joke # 4. I really can’t resist).

Jdate poses a question to its users, and then anyone from anywhere in the world can just randomly answer it.

OK, first of all, please know this answer is from some person who lives MILES away from me and who is a WOMAN, but Jdate thinks I’d be super interested in it anyway. I can also choose to send this question to a friend to answer!

4. Finally, just like Match.com, Jdate charges you for everything. All you can actually do on the site is Browse members. If you want to receive a message, or a “flirt” (another terrifying, Jdate only feature through which users can send each other really corny pick up lines that are pre-crafted, presumably by the geniuses on their Customer Care team, like “With a smile like that, why are you still single?”), you have to have a paying subscription. Now, I understand that this is par for the course on most dating websites. But, the thing I HATE about Jdate, is you can’t tell who is a paying member and who isn’t. So, half the time, people are messaging people who aren’t even able to receive email. Now, these messages wait in your inbox until you get a paying subscription. I had actually snuck on Jdate in February when I first started internet dating, just to see what was out there, but never paid for it till May. This means I had an inbox of messages that were 3 months old, that I felt really weird acting on. What would I say–“Hi Abraham Cohen Goldstein. Are you still single?” This also gave me supreme anxiety about sending any messages myself, since I wasn’t sure if they were going to be successful. Of course, every time you sign on, Jdate bombards you with “specials” and tries to get you to get a subscription:

Jdate, the jig is up. While the chosen people do LOVE a good bargain, we’re also smart and we’re hip to your game. You’re always having a sale. No one would actually pay the outrageous full prices for your service.

Once you figure out how to use the confusing and somewhat irrelevant site and find profiles of people of your preferred gender, I’d like to tell you things get better. But they don’t.

I will stop for a moment and say that I am speaking only in my personal opinion. I have a wonderful friend who has met tons of guys on Jdate who she’s really enjoyed. She was the one who urged me to get on Jdate in the first place. But my experience on Jdate can be summed up in one full sentence: I hate my people and they hate me.

Now, readers, especially Jewish readers. If this is upsetting you, please calm down. Obviously I love my Jewish friends and family. And I did have some real anxiety about posting this frank diatribe. I said to co-blogger S:

Lucky for you readers, S and I share an irreverant sense of humor.

So, just to be clear, don’t take me too seriously. COUGHnsaCOUGH.

Now, let me continue to criticize my people:

1) I received WAYYYY too many messages from people who did not live in the vicinity. Now, again, I recognize this is a problem on every dating site. Tacosdelish is frequently messaged by Thai bankers and Swedish millionaires who cannot resist the smell of her farts. But, the number of out of state, OUT OF COUNTRY, messages I received on Jdate was alarming. Sorry Isaac from Tel Aviv! Momma’s not available to CHAT! (And PS, lots of messages were from guys who live in Israel. Isn’t Israel one big Jdate? Hate to break it to you guys, but if you can’t find a Jewish girl there, you can’t find one anywhere).

2) Thirty percent of men’s profiles reference their moms.  I would say that one in three profiles contains one or more of the following statements:

“Looking for a girl who cooks like my mom”

“My mom made me get on this site.”

“My mom and dad have taught me a lot about relationships.”

I am totally down with guys who love and respect their mothers. But the fact that they are already referencing them on an online dating site makes me a little nervous.

I’m not trying to end up with Buster Bluth:

3) They are a little too, you know, Jewish. I know, you’re shaking your head. Or your fist. What did you expect, L? You are on a site for Jewish Singles. You’re really too much. Listen, I never said I wasn’t crazy. I’m soldiering on with my last complaint.

My very wise friend K advised me at the beginning of this experiment that I might encounter some real Jews:

*Editor’s note: K is also half Jewish. Though evidently, not a “Sabbath goer.”

Welp, K was right, as she almost always is. Every J I went out with, at one point in the night or another, wanted to talk with me about my Judaism.

“So, how often do you go to synagogue?”

“Are both your parents Jewish?”

“Are you doing anything for the high holidays?”

What I learned from this experience is I’m not nearly in touch with my Jewish side enough to field these questions with a straight face, even thouhg they are perfectly legit questions. So sue me! (Actually, Js, don’t sue me. I don’t have any money. It will be a waste of time.)

Despite all my Jhate, I am glad I tried Jdate. I had a really good time with a couple of guys on the site, which means, readers, that you have more fall blogging material coming your way. In the meanwhile, if you didn’t get your fix of “self-loathing Jew-mour,” I leave you with this gem:

8 thoughts on “JDate: The worst thing to happen to Jews since…”