Hi readers! In light of all the drama surrounding certain people’s online alter-egos, I thought we’d spend today talking about mine.

She’ll haunt your fantasies and she’ll steal your dreams.

She’ll steal from the rich and give to the poor.

You’ll never see her coming, yet she will always be in your sight.

Now that I’ve introduced “Tacos”  (as we affectionately call her) with the pomp and circumstance she deserves, I guarantee she’ll replace this little tyke as an icon of national togetherness and joy:

Lolz, Just kidding! Sorry North West (and PS, we know its not even you). I meant this guy:

Let me back up a little. Why have an online dating alter ego? I am sure ANYONE who has ever online dated can answer this question. It’s so you can stalk: your dates, potential dates, guys who message you, guys who DON’T message you, coworkers, people you know who are in relationships, yet looking; without notice and without compromising the integrity of your regular profile. Sure, you could pay extra on OKC for a feature that lets you browse anonymously, but why do that when you could just create another free profile?

Tacosdelish was actually born several years ago, and her name was a joint collaboration between me and my ex-boyfriend. We created the profile so we could stalk our friends who were on OKC.  We didn’t intend to use the profile to actually get dates, so we decided to make Tacos as absurd and unattractive as possible, just to entertain ourselves. According to OKC, she looks like this: 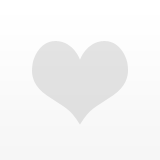 I tried posting a picture of Gru from Despicable Me up there, but we were immediately disciplined by Chris Coyne. So the heart will have to do.

Anyway, since you can’t see Tacos, you’ll have to take her word for what she looks like. According to her profile: 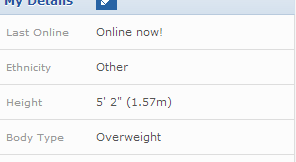 But, looks aren’t everything, as many good fellows of OKC like to remind us. Perhaps Tacos Delish is rich and successful: 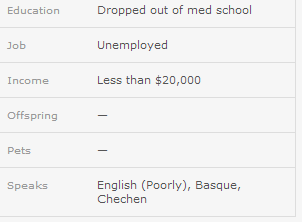 Not only does Tacos lack a job and income, but she also barely speaks English. Which begs one to wonder, how did she fill out a profile? Thank god she speaks Chechen and Basque though!! Such common languages.

However, several men in DC have expressed interest in having a chat  with Tacos over drinks or dinner, which suggests one or more of the following:

1) They didn’t carefully read the profile.

2) They actually speak Basque or Chechen, and mysteriously ended up in DC.

3) Sharing a common spoken language is not a prerequisite for a date.

Now, in spite, of her poor command of the Queen’s vernacular, Tacos has managed to pull together quite an appealing profile. Take a look:

I have to say, I am most proud of how Tacos spends her typical Friday night. And it’s only partially true! (I’ll leave it to your imagination to figure out which parts.)  Interestingly, many guys are quite turned on by the farting. Behold a sample message I received:

Gotta give this guy points for creativity. If Tacos was real, she would have gone out with him and had a farting contest.

Other men take the name quite literally:

Boy, puh-lease! Tacos is clutching her pearls right now. Why?

Because baby girl is a shallow virgin.

On the other hand, she is a virgin with a lot of sexual fantasies:

But what I find most offensive about Tacos is that she’s a Republican:

I have an online dating alter ego.

She makes absolutely no sense.

She gets a ton of messages. Some from really cute guys. TRUTH!