Rejection. Is it a dish best served straight up, or in a more subtle form? This debate has been on my mind lately because my last two first dates have followed the exact same pattern:

You lose some, you lose some. The funny thing is, for a while it was just the opposite: I’d have a mediocre or in a few cases REALLY BAD date, and the guy would basically propose marriage afterwards. Because apparently awkward silence, stilted conversation and overcompensating nervous laughter are like catnip to men! (Don’t forget shifting eyes and stammering. Also signs that the guy will ask you out again so he can repeat the uncomfortable situation.) But of course, I finally have a string of fun, decent dates and the guys disappear into thin air. Oh, life. What a delightful conundrum you are.

So what is the protocol after a first date when you don’t want to see the other person again? Do you formally tell them that, or do you do the classic fade away, loved by men and non-confrontational women the world over?

And which would you rather have done to you? Six months ago I would have said I preferred the fade away. And don’t get me wrong, if it’s reasonably clear that the other person wasn’t super into me, or they ended the date with something universally neutral like ‘it was nice meeting you’, then yes, the fade away is totally acceptable, thank you very much. Message received.

But what about when the signals say otherwise? What about when your date 1. leads you to believe that they’re super into you, 2. acts like they had the time of their life and that they’d like to do a partners’ dance routine with you complete with a LIFT to convey their joy and excitement:

and most importantly 3. says, actually says, that they want to go out again? Well then yes, if you change your mind, or you meet someone else, or you have multiple personalities and the one who showed up to our date feels differently than the one who’s currently inhabiting your body, I believe I’m entitled to a small memo letting me know. All it takes is a short text: ‘Hey there, so nice meeting you but I’m not interested in going out again. Thanks and good luck’. A simple courtesy which absolves me of this song and dance of waiting for you to call or text since you know, you said you would, and saves you from earning the title of ‘douchebag’ on my dating blog (see: N; Dwight Schrute). (Editor’s Note: Please know that I went out with a guy who literally hugged me goodbye at the metro shouting, “I WILL MISS YOU SO MUCH WHILE YOU ARE ON VACATION. I AM PUTTING IN MY CALENDAR THE DATE YOU RETURN SO I CAN CALL YOU IMMEDIATELY.” Direct. quote. I mean, I was a little terrified by his theatrics, albeit still flattered. And I am sure you can infer from the post’s UPBEAT tone that I returned from vacation two months ago, and I still have yet to hear from this clown.)

The worst part about getting the fade away after a good date is that it makes you totally question your instincts and your judgment. It makes you feel like you’re the stupid one who somehow misunderstood/misread the situation. Real life example: the first of my two last dates was a lot of fun… M and I hit it off, had great conversation, good chemistry, and made each other laugh. Our date lasted over three hours and there was never a dull or an awkward moment. When we parted ways M said he had an awesome time and asked if I’d like to go out again. I said I had a great time too and that I definitely would. I received this text when I got home: 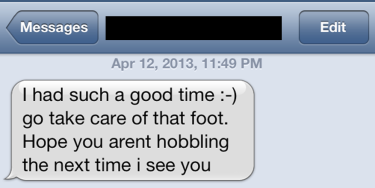 Ahahaha inside joke from our date. God, M, you are so funny.

Turns out M is also an asshole, because he then totally disappeared. Right after he said “the next time I see you”. So I’m assuming he meant “see you” in, like, an existential way…?

I recently lamented this phenomenon to L on gchat:

Preach, L. The “death scenario” is easily the most comforting thought process to go through when you’re on the receiving end of a fade away. Just simply imagine that the person died or at the very least is laying in a hospital bed in a coma somewhere. And who knows? Maybe it’s actually true:

Except the problem with online dating is you can see when people are signed on. And literally every time I get on OKC, there’s M, alive and well, presumably cruising for more girls to fake being infatuated with. He clearly needs to put a hundo in this baby:

That all happened over a month ago. The more recent fade away happened about two weeks ago with a different guy, also an S. Again, we had (or at least I had) a great time… good conversation, lots in common, joking, laughing, little to no awkwardness. Again, the date lasted over three hours. Finally we parted ways. Again, S said that “he had a great time” and then something to the tune of: ‘So I’ll call you/text you later this week about getting together again?’

You can guess where this is going: absolutely nowhere. I got another unsolicited late night text saying ‘had a great time, so nice to finally meet in person’ and then nada. I mean. Gentlemen. If you don’t want to go out again, how hard is it to just say NICE TO MEET YOU at the end of a date and then disappear forever? ‘Nice to meet you’ with nothing else attached is the universal ‘thanks but no thanks’ of dating. If you’re going to pull a fade away, at least do it correctly!

I originally touched on this subject a few months ago when I wrote about my first fade away after a promising date, and I posted the following clip from the seminal film He’s Just Not That Into You:

I enjoyed this movie as a senseless romcom that allowed me to stare at Ben Affleck for two hours, but the way it portrayed women also pissed me off. Ginnifer Goodwin’s character is such a clueless halfwit in the beginning, and while I sympathized with her single gal plight she also made me cringe. I watched that above scene and just thought, no intelligent, normal adult woman is that naive. No one hears ‘nice meeting you’ and thinks they’re going to marry a guy. No one goes a week without hearing from someone and still thinks they’re going to call.

But what about the M’s and S’s of the world? Why didn’t the movie cover that scenario? Am I a Gigi if I actually expect “Would you like to go out again?” to mean we’re going to go out again? I don’t think so. I don’t think single women are these insane, pathetic creatures who don’t understand how men “operate” if those men are just straight up lying.

Beyond that, if you’ve been following StuCu, you’ve glimpsed who is currently on the market. This guy. And this guy. And this guy. It is tough. times. out here in Singleland. And while I’m certainly not lying awake at night pining away for either of these guys who I met once, I will admit that when a non serial murderer who can actually formulate a sentence comes along, and he doesn’t immediately try to share a troubling sexual fetish on me or insult me to my face, it’s kind of a big deal. So giving me false hope is frankly just cruel and unusual.

We all know dating is hella awkward. Especially because in the beginning, one party is usually more into it than the other. I’ve been on the other side of the coin multiple times, so I know from experience that it’s not fun or easy to tell a nice person that you don’t want to see them again, even if it’s through something as impersonal as a text. Full disclosure: I recently put off rejecting a guy who I’d been seeing on and off just because he was super nice and I felt bad. But I do believe in the golden dating rule, and that’s:

Reject others as you would want to be rejected.

It’s basic human decency and at the end of the day, good dating karma. Although, if my recent dates are any indication, that’s apparently something I don’t have in spades. Which is surprising seeing as I did spend half an hour of my life helping a certain someone find his automobile. Doesn’t that count for something, universe?

UPDATE: Our dear friend and loyal reader E shared this in the comment section:

Here I was smugly thinking my post was so original and that I basically coined a new phrase that would quickly take the internet and urban dictionary by storm, when I come to find out it already exists! Good to know. I swear I’ve never heard this song before, Garfunkel and Oates. Please don’t sue me. xoxo

Except in their version, the ladies are the ones being assholes and pulling the fade away. Interesting. As E said in her comment, apparently this practice is so ubiquitous that both sexes have (allegedly) experienced it equally. I’m kind of baffled that these gals have never been on the receiving end, but I totally appreciate their lyrics, which still ring true:

The fade away: dating pandemic.

23 thoughts on “Dating Phenomenon: The Fade Away”