If you couldn’t already tell, I consider myself a woman who wears many hats. (Not literally. I look terrible in hats. Mediocre bone structure.) But figuratively, I do a lot of things besides my day job. There is blogging, there is book clubbing, there is babysitting, there is some serious Pilates devotion. Am I good at all these things? Not necessarily. But you know one side hobby I’m quite good at? INVESTIGATING. (Some people call it online stalking). Now, I have to give credit where credit is due. I learned 30% of my tricks from Law and Order and CSI Miami, which is why I have conferred on myself an honorary police academy degree.

And, I learned most of my skills from watching this chick:

Seriously Veronica, I won’t stop it, because you’re a goddess among mortals. For those of you who  were, sadly, deprived an adolescence, that beautiful, brilliant vixen you see is Veronica Mars, star of the self titled UPN series about a teenage, butt-kicking detective. Who my friends and I worshiped, and to this day, strive to be (minus all the near death experiences she has).

Anyway, here’s the deal with investigating these days. It’s SO FREAKING EASY PEOPLE. I mean, remember how easy it was for S’s current dude to find our blog?

Usually my investigation into my dates begins and ends with what I like to call “a little healthy googling.” Usually, the guy has shared enough with me via messages and his profile that I can perform an accurate enough google search to find his last name, and from there, perform another google search to learn everything about him. For example, if someone named Harry tells me he works at the World Bank and has 1984 in his username, I just search Harry, World Bank, DC, and, if needed, add the words graduated 2007 or 2006 and see if anything comes up. Once I realize his last name, I perform another search which usually reveals any letters he ever wrote to the editor, an old Myspace profile, his Meetup.com profile, and, if I’m lucky, perhaps some wonderful biography in his college alumni newsletter. Or I’ll get to listen to some wonderful tracks he and his band uploaded to Soundcloud.

Now, please don’t get all Judy Judgmental about “a little healthy googling.” First of all , information is POWER (and safety. You’re welcome mom. Told you I was taking care of myself). I am not meeting these guys through my cousin or mutual friends, I’m meeting them through the internet, a “place” where you can pretend to be anyone you want, including a bisexual Chechen with gastrointestinal problems. I want to make sure the guys I’m chatting with are who they say they are.

I understand that people often associate romantic things with mystery and surprise, but I believe that stuff belongs in the movies, or an at anniversary party you plan for your grandparents.

Now, the only thing about online stalking before your first date is that you learn things your date might want to tell you in a first meeting, such as where he went to college, what he does for a living, what his hobbies are, etc. And, for the sake of the conversation, you need to be able to nod along  as if you’re interested and ask interesting follow-up questions. It’s no good for your chemistry if you act like you know more about his background than he does.

Unfortunately, I wasn’t able to stalk J,a guy I first went out with in mid-December, before our first date. Every once in awhile, a guy has a  very common first name, and a nondescript job like “analyst at a think tank,” which describes 40% of the men in DC. So, I went into my first date with J blind. Fortunately, the date was super fun. He made a reservation at one of those exclusive little speakeasy places I’d be been wanting to try. And in addition to being really handsome, he was smart and a gifted conversationalist. We talked for two hours, and he asked me out again for a second date before our first date was over. He sent me a couple of texts over the weekend, reiterating what a great time he had, and confirming our date for the following week.

Of course, on the date, J had revealed his undergrad university and his hometown, which provided me with more than enough information to do a Veronica-esque internet search on his background, which basically confirmed all the facts he told me on our first date.

Or so I thought…

Enter second date, which happened two weeks after our first date due to Christmas vacation. We met up a bar in his neighborhood for drinks, dinner, and another great conversation. I mean, I will admit that while J was interesting and smart, he wasn’t the nicest person in the world.  But, I figured, I was on the market for  a fun date, not like, new candidates for pope.  So I ignored that part of his personality for the time being.

At the end of the evening, J asked me if I wanted to come over for “a nightcap.”

Now here’s the thing people. I know I talked a bit about how I wanted to run a longer game in 2014. But you should have seen J’s body. I mean, I could see it under his shirt. His button down, preppy shirt. I swear, it was in the neighborhood of this:

So, I hope you will not judge me when I tell you that I said yes to the nightcap. And when we got up to his apartment and he said, “Actually, I don’t even really have any alcohol. We can split a beer if you want.” I stayed. I wasn’t in it for the beer, friends.

So, an hour later, I am using J’s restroom, and I decide to do another investigator move called, “a little healthy snooping.”  Before you get all Jay-Z on me and tell me I’m gonna need a warrant for that, let me explain the parameters of this exercise:

Per rule #2, I was staying over and therefore had grounds to access anything in the bathroom. (Don’t you like all my legal jargon? I told you I had an honorary police academy degree!)  PLUS, J had just moved apartments and his stuff was in little boxes all over the floor. And what did I see on top of a box but a hair dryer? Now, J had pretty short hair, so I was guessing the hair dryer wasn’t his. But who knows? Maybe he kept it for guests, or used it to dry his socks? But then I opened the medicine cabinet (ostensibly looking for toothpaste and face wash). And, sitting on one of the shelves was an open pack of Neutrogena Eye Makeup Remover wipes.

My spidey senses told me something was off here. So, what did I do? First, I used the makeup wipes to take the mascara off my eyes. Nobody wants to go to bed with that on. But then, I went back to J’s room and said, “Why do you have makeup wipes and a hair dryer in your bathroom? Did you just break up with a girlfriend or something?”

J looked a little caught off guard. “Uh…yeah…that’s it.  I just broke up with my ex-girlfriend. How did you know?”

“Why else would you have feminine products in your apartment?” I replied.

But then, without missing another beat, J said, “I kept the hair dryer because I might need it again someday. And I use the make-up wipes for camping trips.”

Maybe I was tired. Maybe I wanted to believe him, just for a few hours, because we were having so much fun. But I dropped the subject and we got back to business.

But the next morning, I couldn’t shake the feeling that something was up. When he kissed me goodbye, and said, “See you later, right?,” I decided to take a stand and not respond like a normal, conflict-averse person. I said, “Listen J. It’s fine if this was just a fun fling, and you don’t want to see me later. But there is no reason to tell me that if you have no intention of calling me again.”

Now, between last night’s investigative plunge into his bathroom supplies and this aggressive statement, J’s spidey-senses were probably going off too. And, while, they may have said, “This lady is CRAY,” they most certainly must have said, “This girl is ON TO ME.” Of course, J, was like, “No, I really want to see you again. As long as you want to see me too.”

When I returned home, I decided to find out a little more about who J’s ex girlfriend was. So, I returned to his facebook page, and examined the public posts on his wall, and who had liked and commented on his photo. I noticed one girl commenting and liking photos again and again. Her name was C. I clicked on C’s profile and what did I find? A picture of her and J, together, arms around each other.

Now, some of you may be thinking:That means nothing. C could be a sister,  a cousin, a friend. But J didn’t have any sisters. And if she was a relative, he was holding her a little too close for comfort.

Now you still may be thinking: Maybe that’s an old profile picture. But she had just posted it a week ago. And someone had commented, “Is that you two at Christmas?”

Our old friends Benson and Stabler would call this circumstantial evidence. And indeed it was. So I decided to dig deeper. And what did I find? C had a wildly public online presence, complete with a blog, public Instragram, Pinterest, and Twitter account. Instagram featured a bunch of pictures of her and J together. On Twitter, she was promoting some articles J had written. And, on Pinterest, C had a Pinboard dedicated to J, and one dedicated to, presumably, her future wedding.

So, what’s an investigator’s next move? Bring in a trusted team of consultants, of course. I immediately g chatted my friend K and asked her to review the evidence: 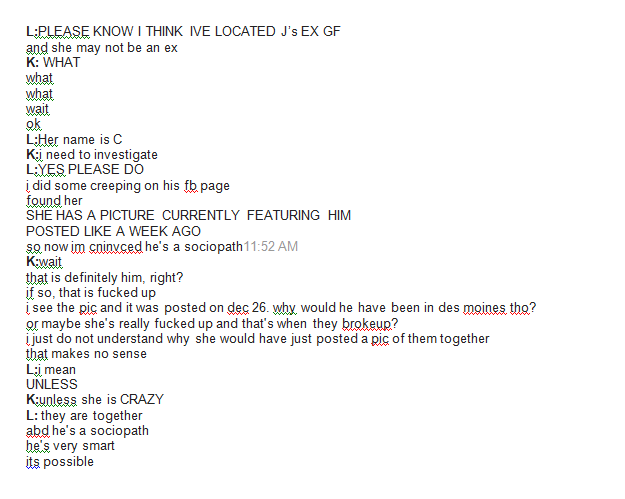 Of course, I reached out to S for a good old reality check:

So what was the result of these investigations? I never contacted J again and he never contacted me either. Maybe it was just a regular old fade away, but I like to think that I avoided an untimely death by a hot, Gos-bodied sociopath.  And, for the record, while C’s obit hasn’t appeared in the paper yet, she has not updated her social media in awhile, indicating a possible disappearance. I mean, when you put all the evidence together, J was one sketchy individual. And, after a careful review of the evidence, even S came to that conclusion:

So cheers to being alive readers, even it’s alive and going on lots of first dates. See you next week, unless J gets to me first.

6 thoughts on “Confessions of a private investigator: J, C, and me”