We spend a lot of time on this blog mocking all the ridiculous things that men do and say to us. That doesn’t mean, though, that the three of us haven’t made our share of facepalm-inducing dating snafus. So I thought it would be a…humbling exercise to put my ass in the hot seat today and share a bit of my shame with you readers, especially since yours truly made a really smooth move on Okupid this past weekend. And by smooth, I mean painfully awkward.

Allow me to set the stage: this single 29 year old was home on a Saturday night, dicking around on the computer while catching up on her stories, and signed onto Okc to check a (terrible) message. Yes, my life is super exciting and not at all sad!

After I checked my (terrible) message I decided to cruise for dudes. I came across a profile that I’d seen before and decided to shoot the guy a quick message. I paused momentarily, wondering how pathetic I was going to appear by messaging a guy on a Saturday night.

When I send someone a message, I try to zero in on one or two profile details that can be potential conversation starters. This guy’s favorite movies were almost identical to mine, and he had the following little caveat at the end:

Trading Places is an 80s movie that takes place in Philly and is a cult fave around here; there’s literally a bar named after the two main characters. Whenever I told people from the area that I’d never seen it they would practically shriek with horror and alarm. 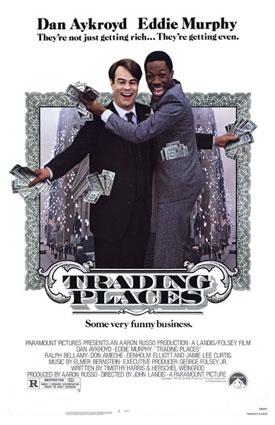 Well, I finally got around to seeing it just last weekend, so I figured it was a perfect conversation starter, right? I threw it into a quick message…

…also inexplicably calling attention to the Saturday night thing, because I’m just so breezy and self effacing, and hit send. I was about to sign off Okc and continue on my merry way, when something possessed me to click on my sent message history. And that’s when I realized:

I’d messaged this guy before.

Not a year ago; not three months ago.

And he never responded.

Oh it gets better, readers. I clicked on my first sent message and to my horror realized that not only did I message the same person, but I messaged him ABOUT THE EXACT. SAME. THING.

How did I not remember writing this? Was I drunk? Sleep-typing? Did I black out?

My favorite part about this whole thing is that I accidentally gave a stranger REAL TIME STATUS UPDATES on whether I’d watched a random 80s movie. As if anyone would care about that, let alone a guy who already received and made a conscious decision not to respond to a message from me. It basically looks like I said, ‘WELP, didn’t hear back but I refuse to take no for an answer, sir. I’m just going to keep blowing you up about this movie which I’m apparently obsessed with until you respond!’

Louis Winthorpe III, I know how you feel.

Also, if by some chance this dude has his own dating blog where he writes about all the whackadoo girls he runs into on Okcupid, those messages are going to make an excellent post. You might even say I’m…trading places with the guys we skewer on this blog.

Moral of the story: everybody acts a fool sometimes. This time it was me. (On a Saturday night.)