Oh hey there, all you friends out in cyberland. Remember me? Founder of the very blog you’re reading? Single person who recently pledged to blog more often? It may not have escaped your notice that directly after I made that claim, I pulled an Irish exit and disappeared for over a month. I swear, I didn’t even realize I was gone that long. In my mind it had been like, two weeks since I’d posted something. Then I jumped on the blog to read L’s most recent post and out of curiosity, scrolled down to read the last thing I wrote. Ummmmm that was on October 2nd. It’s November 8th. What. The. FUCK???

How can I explain this time warp/my absence? I have no excuse. I haven’t been in jail, or in LA developing the pilot to my TV show (I hear Amy Poehler is really busy shooting Parks and Rec at the moment), or doing anything else remotely exciting or interesting. I’ve been slogging my way through fall and experiencing the worst writer’s block since my paper on Madame Bovary was due in 12th grade AP English. Meanwhile L and D, the best co-bloggers EVER, have been keeping you boos entertained and cheerfully carrying my dead weight while gently prodding me to get my shit together and post something, ANYTHING, and I’ve just been like….yeahhhhh. Sorry, girls. I’ll get around to that…soon.

But seriously. This is a blog about dating. I’m not writing federal grant proposals. I’m not defending my thesis on astrophysics. So what the hell is wrong with me? As it turns out, a few things. First, I think I took the H thing harder than I’d like to admit. I’m not trying to sound dramatic; I’m fine. I promise, I’m not going to cry (lucky for you guys I’m not drinking red wine while writing this. Yet.) But honestly after everything went down, thinking or talking about dating has just not been a fun experience.

Second, it’s been a soul crushingly unsuccessful month of attempting to get back in the saddle. As in I’m currently batting .000. As in, I have not managed to go on ONE first date since I ended it with H. I’ve had string of inexplicably bizarre, boring, and just all around awful interactions with men I don’t even like. So when I say writer’s block, I mean yes, I’m having a hard time putting my thoughts into words, but mostly I just mean I literally cannot seem to obtain new subject matter to share with you fine people.

Since I have no new dates to tell you about, I thought I’d give you the next best thing… October Okc highlights! Here’s the roundup: 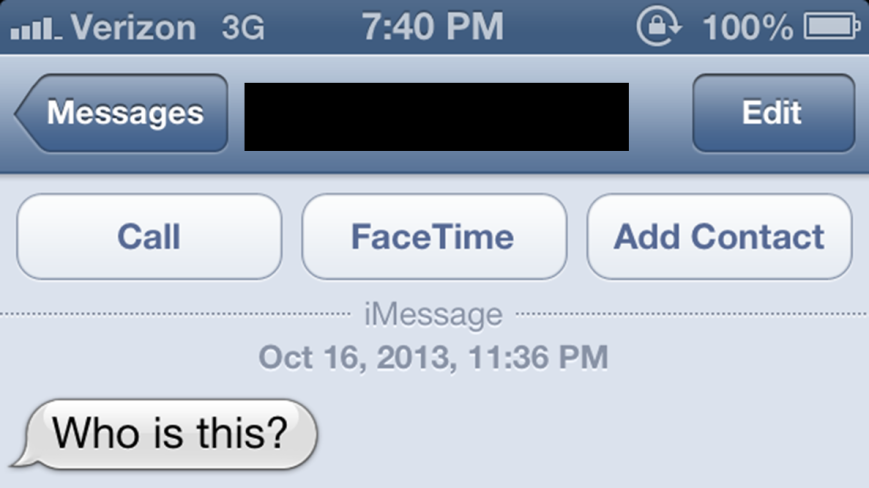 Shit, I thought. I typed his number in wrong. But I double checked and nope, it was right. So I responded. 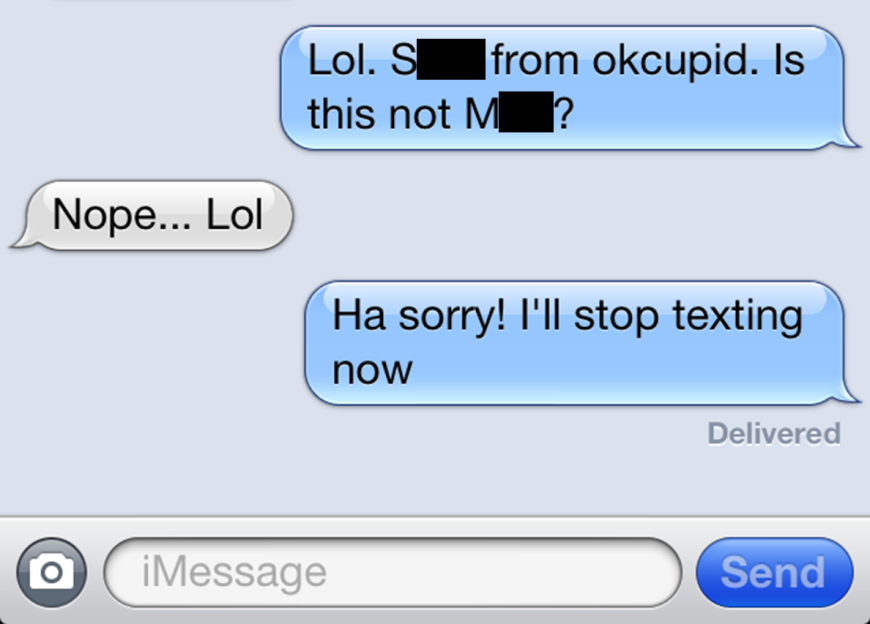 I thought to myself, this is one of three things: 1. a really bad elaborate joke on his part, 2. a bizarre way for him to ditch me, or 3. an honest mistake. So I messaged him:

My bad? That’s it? Am I just being cranky, or is that the most humorless response to this scenario ever? What kind of person wouldn’t take the opportunity to respond with something like ‘hahaha so sorry, can’t believe I gave you the wrong number.’ Or, ‘this is amazing, what did the other person say? Do you have a date with them now instead?’ Or even just, ‘WOW I can’t remember my own phone #…embarrassing’. Something, ANYTHING that indicates you have a sense or humor/actual pulse and aren’t, in fact, the most boring person on the face of this earth. UGH. Needless to say the conversation petered out, and that was that. 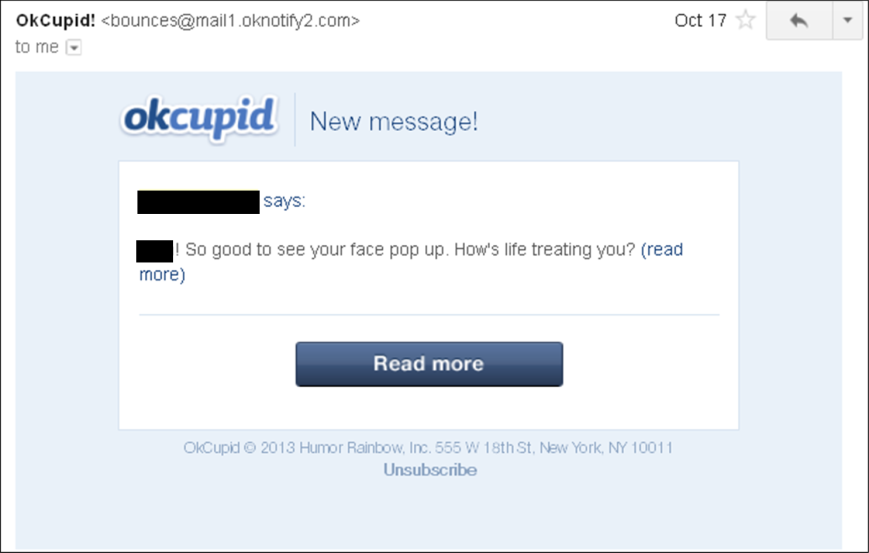 Ummmm what? Seriously. I thought, what the hell does this dude want? Because he must want SOMETHING, right? Right. So I responded in the most vague, neutral way possible, basically like ‘hey back, hope you’re well!’ purely out of curiosity. J then proceeded to send me a series of messages on the following topics:

I officially do not understand men. What possessed this guy to reach out to me out of the blue and tell me his deepest darkest secrets? L was positive that he was going to ask me out again but I said no, I think he’s literally just lonely and wants someone to talk to, and clearly I was right. In the beginning I had been vaguely responding to these messages, again more out of curiosity than anything else, but it got to the point where I was like okay thattttt’s enough of that and just stopped responding.

So there you have it, friends. My October on Okcupid. This parade of freak show interactions combined with someone who I really liked saying ‘no thanks’ to exclusively dating me, well.. it messed with me. I uttered the infamous single girl words: “what’s wrong with me?” probably 15-20 times. ….A day. (To be fair, this phrase is so commonly used among the three of us that our autobiography will likely be titled: “What’s Wrong With Me? The LSD Story”.

I just felt like, and I still feel like, in order to really be over the H mess, I need a new first date. Even a bad one. Even a COMICALLY bad one. And I can’t even make a bad one happen! It’s now been FIVE MONTHS since my last first date (with H). It’s gotten to the point where by the time it does happen I’m afraid I’ll forget everything I’ve ever learned about online dating and act like a complete lunatic.

More importantly, I have a dating blog. I have loyal readers (okay, I have family and friends. Egomania: in check!) who come here for a laugh and to read about, you know, dates. With actual men. So is this it? Is this where I throw my dignity down the toilet and hop on Craigslist personals? Or worse, Tinder?

Not today, dear readers. Not today. Instead, I’m going to pull a Scarlett O’Hara and tell you all right now:

I WILL go on a first date in the month of November. Not because I need to be dating someone to be a happy, successful human, or because I’m desperate for male attention or a boyfriend, or anything like that. But this inability to get a date has become a thing now, and it’s bugging me, and I need to shake it off and move on. Also, I have a sneaking suspicion that actually having something to write about is going to help with my “writer’s block”.

6 thoughts on “Can’t get a date. Seriously.”