First of all, if you ever have the opportunity, go to Iceland. Seriously, do it. If you don’t find it to be stunningly beautiful, you are dead inside.

Second of all, I leave the country for 11 days, and all sorts of crazy, awesome shit goes down at home.  We won an award! We gained 7 new twitter followers! I suddenly became desirable again on OKC and HAW after a drought and months of this:

I received multiple messages on OKC containing 1 or more complete sentences! 5 guys were interested upon viewing one of my date ideas on HAW and messaged me! Match continued to serve no purpose other than to steal my money and send me e-mails suggesting ways it could steal more of my money! Ok, that last one isn’t actually awesome, but it was oddly comforting – it was proof I wasn’t in some alternate universe. I took all of these positive developments as proof that traveling is the greatest and I should do it even more often than I already do.

But back to my dating developments… I was getting my groove back!

Since I had limited access to wi-fi while away, I was able to respond to messages occasionally. This is where things went a little off track with some of the promising gentlemen. Let’s start with HAW.

First, a crash-course in How About We for those who are unfamiliar with it. Profiles are short and sweet – some demographic info and quick responses to specific prompts (e.g. a story you should remind me to tell you on our first date, I secretly want to be). Then, you post date ideas. 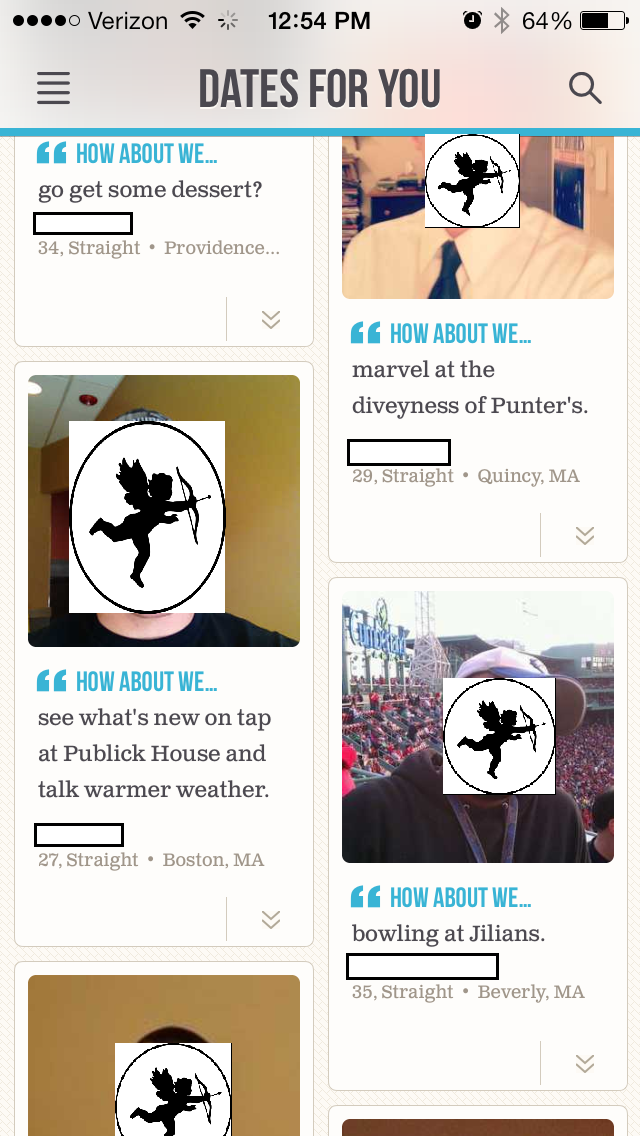 Users peruse the date ideas and if they see one they like, they open up the date and have two choices: “Message Him/Her” or “I’m Intrigued.”

“Message Him” is pretty obvious – it opens up a blank message and you type out your most charming, witty message and hope for the best. Clicking “I’m Intrigued” sends the other user a generic message that says “I saw your Publick House date and I’m intrigued.” It’s the equivalent of liking someone on OKC or winking at someone on Match. The lazy approach to letting someone know you’re interested, and/or the shy person’s way of reaching out.

So, one of my proposed date ideas involves night skiing locally. I got a personalized message from M who ultimately told me to let him know when I was home and we’d set up a ski date. Great right? Well I returned, sent him a message, and got no response in that thread. Rather, he sent me a separate, independent “I’m Intrigued” message 16 minutes later. I don’t know what to do with that. I know you’re intrigued. We already established that. In fact, we already established that we would make plans to go skiing. So why are you ignoring my attempt to actually make said plans, whilst simultaneously sending me messages coyly telling me you’re intrigued BY THE VERY DATE WE ALREADY SET UP?!

That was Wednesday afternoon. I still haven’t figured out what to do about M.

Another guy responded to the same skiing date idea. This guy simply clicked “I’m intrigued.” I checked out his profile, and though he looked vaguely familiar, I brushed it off and responded.

Side note: I’m obsessed with that gif. I laugh hysterically every time I see it. Ok, back to the regularly scheduled programming.

Setting aside the fact that he called me hun (which – DON’T), he starts off with a nonsensical response. What do you mean “what?” You fucking messaged me. It’s literally 2 messages up in the thread. What is confusing about my response? And when I don’t respond in a timely fashion according to his standards (3 hours, 46 minutes, and NOT A MINUTE MORE), he accuses me of bothering him. Again, you messaged me buddy. It was then, looking at his smiling profile pic next to that terrifyingly aggressive message, that it clicked. He WAS familiar. He’s nylon guy. Shudder.

Over on OKC, I exchanged a few messages with R, who pretty quickly asked if I’d like to make plans when I returned. My kinda guy! I said I would love to. I got back late Tuesday night. Wednesday morning he contacted me to see if I had made it home safely. Very sweet. Then he dropped this bomb on me:

I don’t even know where to start with that. For the sake of not being a total asshole on the internet, I’ll simply say that I did not find that poem charming or sweet.

Against my better judgment, when R asked for my number I gave it to him and continued to entertain the idea of going on a date with him.

Oh christ – not another movie date.

That last comment is teetering on the brink of needy. Throwing an lol at the end doesn’t make it less needy. And that frowning winky face – what the fuck is that even supposed to convey?

I forge on though, despite the warning bells going off in my head.

STOP WITH THE VALENTINE’S THING. It’s so desperate sounding. At this point, mid afternoon on Wednesday, I feign a meeting and tell him I’ll talk to him later.

Thursday morning I wake up feeling refreshed after a good, long night’s sleep, see CC for the first time since returning and get a big smile from him, and get into work to a desk completely empty of a particular case. I’m feeling fantastic. So I decide to give R another chance. 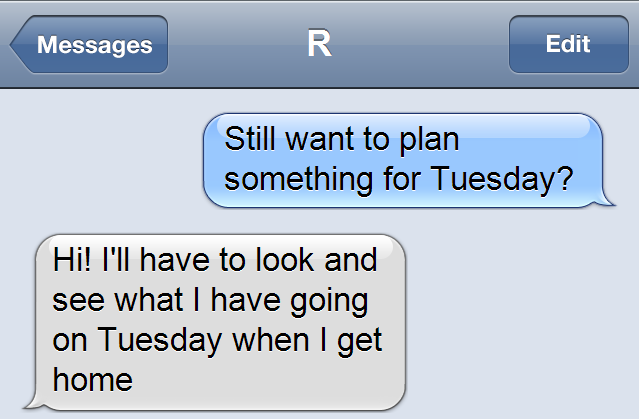 Umm? Say what? Tuesday was your suggestion. But ok. 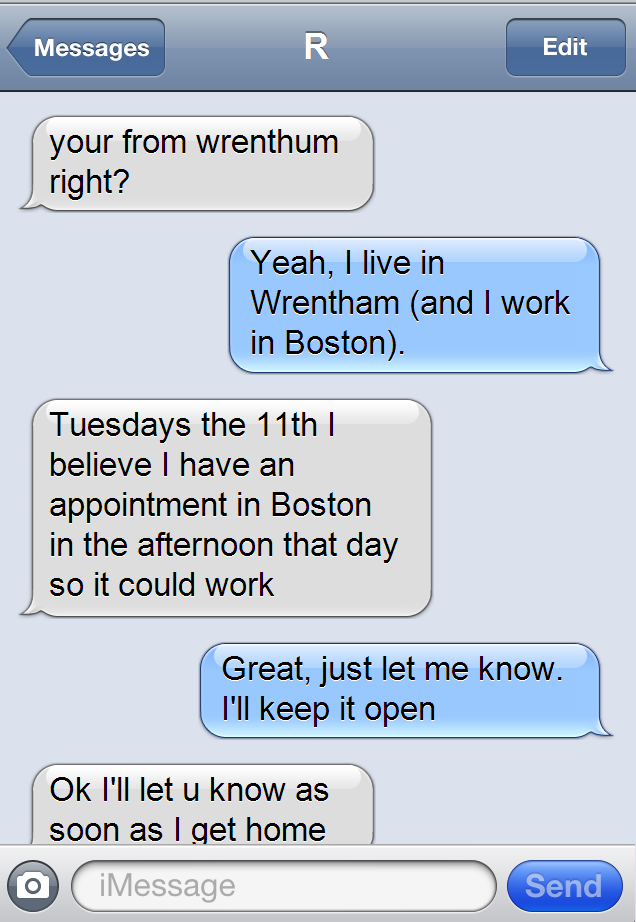 A little while later, he gets back to me. 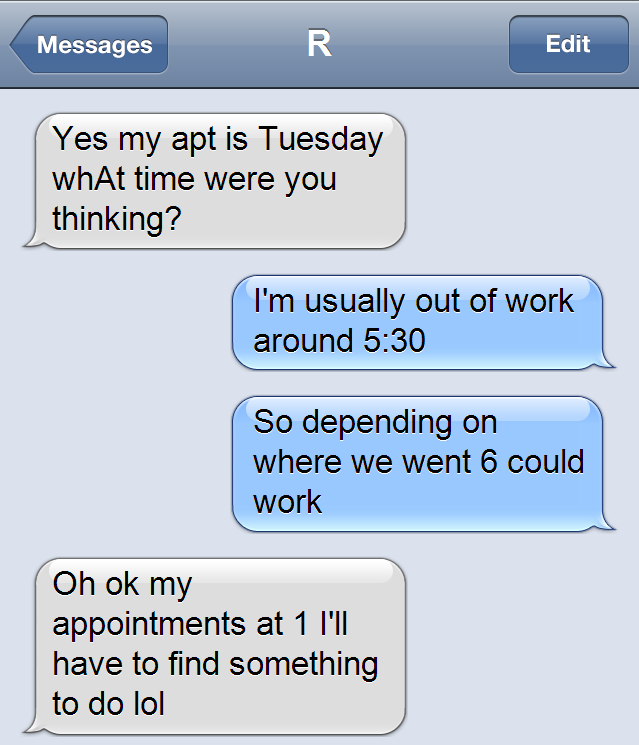 This was completely befuddling to me. I mean, firstly, I had told him I was available Tuesday, Wednesday, and Thursday nights. So what made him think I was available mid-afternoon? Not to mention that he’s aware that I’m a lawyer – which is pretty typically a Monday through Friday 9-5 job. Whilst still processing the above, he follows up with a picture of himself and this:

Even if you are joking (I presume that’s what Jc means), coupled with some of the other shit you’ve said (::cough:: valentine’s day ::cough::), I’m getting the impression that you’re extremely needy. And I don’t do needy. A) I don’t have the patience for it. B) If you’re that needy yourself, how are you ever going to field my 11:34 p.m. phone calls that I’ve got a piercing, radiating pain in my left mid-thigh and remember when I fell on my left knee a few weeks ago – IS THIS A BLOOD CLOT ON THE MOVE? AM I ABOUT TO DIE IN A SNOW AND ICE COVERED MBTA PARKING LOT IN SUBURBAN MASSACHUSETTS? Because, shit like that happens frequently when you’re a part of my life. That is a verbatim transcription of the shrill phone call my father received last night. And that saint of a man (along with my 3 EMT friends who also frequently field my hypochondriac freak outs) needs a break dude.

But I’m still feeling high on the freedom from that case and the 3 Kinder bars I ate at lunch (God bless you and your delicious chocolate confections Europe), so I keep going with the Poet. 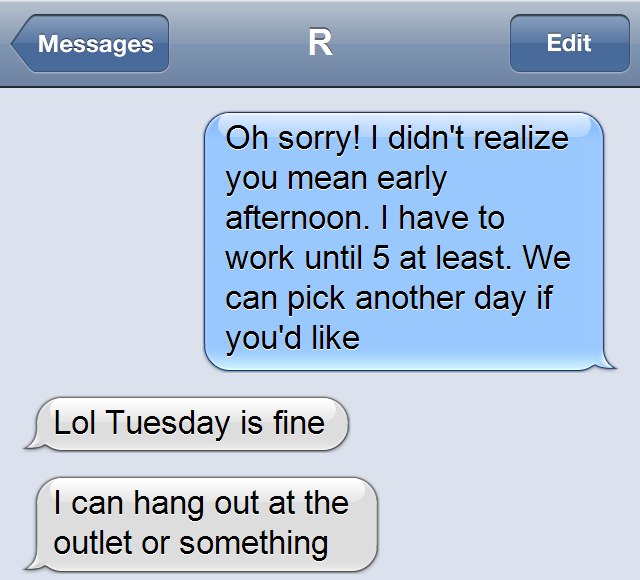 I realize at this point that not only did he think we were planning a weekday, mid-afternoon date, but he also thought this date was happening in Wrentham. Despite the fact that we had established we would both be in Boston on Tuesday. His complete lack of ability to grasp time and location based on previous discussions snaps me out of my sugar high. This guy is not going to work out. Just to be sure, I ask:

Yup – this guy needs to go. Between the poem and the valentines day thing and his incompetence, I can’t. I was going to need to let R go. Tomorrow. I’m a procrastinator at heart.

This morning, I was all set to say goodbye to R and let this outrageously long post fly. But before I could click Publish, R wanted to know why I had changed my mind: 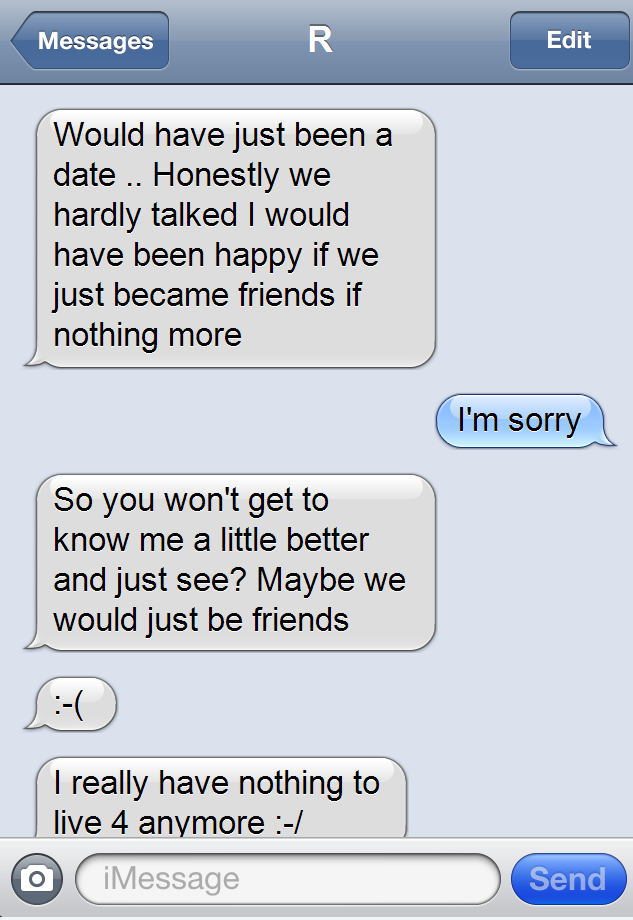 Yeah – I definitely made the right choice.

Oh, and just for good measure, I was propositioned late last night on the orange line after grabbing a couple drinks with a friend after work. By a guy who I presume is a low level drug dealer or pimp based on the enormous ball of wadded up cash he pulled out of his jacket pocket.

I’m in A groove, but I think it’s the wrong one…

4 thoughts on “How D (Sorta) Got Her Groove Back”