If you read L’s sports blogger post earlier this week you already know that LSD are huge fans of the show The League. The three of us have been binge watching the new season on Netflix simultaneously, LOLing at Ruxin’s antics, drooling over Pete, and being grossed out by Rafi.

Sorry to suddenly turn this into a 100% League themed blog (lest you all get the idea that I actually like football, because incidentally I hate it) but a plot line in one of the episodes caught my attention. Pete, the scruffy, adorable ne’er do well, tells the guys about a “points system” that he’s devised for picking up players off the waiver wire (real talk, I had no idea what that even was before I watched the show), and how it also works in the dating world. Basically Pete assigns players (or women) who are left after the draft (or who are single) points for their positive and negative attributes, and then makes a decision based on their final score. I swear I searched for half an hour for a Youtube clip of this damn scene but had no luck whatsoever. The best I could muster was an Amazon Video free preview clip of the scene that they won’t allow me to embed into this post. #bloggingfail. If you care, here it is. According to Pete:

“Those who are left, myself included, have a ton of baggage. Maybe it’s a bad hamstring. Maybe she’s got daddy issues. The system allows me to ferret it all out and make the right pick.”

Please know that Pete also claims women older than 28 qualify as the female equivalent of leftovers from the draft. Well thanks, Pete/writers for The League. I’ll be turning 29 in less than three months, so that makes me feel faaaaannntastic.

But Pete claims this is also one of the reasons the point system is so useful: the older we get, the less time we have to BS around with someone who’s not right for us. He shows the other guys how efficiently his system works by using it on a strange woman in a bar. It’s simple arithmetic: add points for the positives, subtract for the negatives, and make a call based on their final score. In the end, the joke is on Pete, because a girl who he goes out with and really likes uses the points system on him and decides he doesn’t measure up. Pete ends up with a -7 score, and no second date.

I would be lying if I said this concept didn’t intrigue me a bit. The thing is, I think it’s something that most single people are already unofficially doing in our heads. Here are some examples of things that I subconsciously keep track of. I have assigned each item a numerical value of importance using the Pete Eckhart system:

Now, pretty much all of these categories could be used across the board on any date, but sometimes things come up that are more…individualized. Here are two examples of positives and negatives that were specific to a certain guy:

Please know that in typical foot-in-mouth S fashion, I went on this exact rant in front of J before I knew this about him. He got really quiet for a second and then replied (in a super serious tone): “My whole family goes to Disney once a year. We’re actually going again over Christmas.” 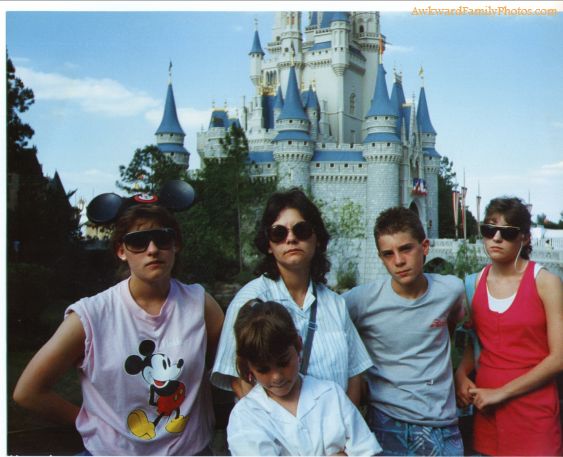 (I have no idea who these people are, btdubs. I googled ‘awkward family Disney World pics’ and this family came up. Clearly they’re about as pleased with my Disney trash talking as J was).

So yeah. I secretly kind of believe that whole exchange was the real reason  J dumped me but let’s be honest, it wasn’t meant to be anyway. Mama is not about to spend her Christmas in line for the “It’s a Small World” ride.

Annywayyy…. sorry for that tangent! Back to the topic at hand. Last night, in the name of Stucu research, I took the points system for a spin on someone I’ve been messaging but haven’t gone out with yet. Here’s what his breakdown looks like (remember, I haven’t met this dude):

That last one….I just can’t. Am I the only one who finds that to be incredibly lame and gross? It’s like adults who still talk about their SAT score: CALM DOWN. You’re really smart. I get it. I actually originally thought this was grounds for dismissal because ew, eyeroll…

but when I did the math, this guy (also a J) squeaked by with a +1. If he doesn’t fall off the face of the Earth (again), I may still give him a shot because 1. he has a positive point value and I want to test this theory and 2. there’s a fairly good chance that he’d show up to our date wearing this:

and legitimately attempt to test my IQ. Which let’s face it, would make for some fanfuckingtastic blog fodder.

One final note on the points system: while I think it’s fun, efficient, and maybe useful to a point, it’s also super arbitrary: how much is something like sense of humor really “worth” to me in relation to say, height? I’m not sure quantifying it is that helpful an exercise. Especially because I also think it discounts a huge part of what’s important in finding a match, and that’s chemistry. Sure, I can assign points to ‘makes me laugh’ and ‘good conversationalist’, but that doesn’t entirely cover it. L and I were recently discussing this: there is that intangible connection/compatibility/attraction that you just have with some people and you don’t with others, period. And having done the online dating thing for a while now, I honestly believe in chemistry more than ever. Maybe it’s the format of getting to know someone before actually meeting them… I can’t tell you how many times I’ve been out with a guy who was nice and cool enough over email and who I was excited to meet, and then it just fell totally flat in person.

Also, I think it’s much harder to find that intangible connection than it is to come across many of the things on my “list” (with the exception of ‘good at making plans’ and ‘over 6 feet tall’. Tall dudes who can plan an outing, holler at me!). For instance, K would have done well on the points system, but I just wasn’t feeling it with him. No chemistry. Meanwhile, with other dudes that would get a mediocre score at best, my chemistry has been off the charts. I think the key (and what makes it so hard to meet someone awesome) is to find a combination of both.

So, dear readers, what do you think of Pete Eckhart’s points system? Is it unromantic BS, or do you think there’s actually something to it? If you’re single, have you ever weighed the pluses and minuses of a date or do you just go with your gut?

Also, while we’re at it, should I give Mensa dude a chance or get rid of him? (rest assured I’ll still make my own decision, but I’m curious to hear what you guys think):