My POF days are over. I deleted my profile and account. I had originally joined it because I figured it couldn’t hurt to have a profile up on another dating site. Twice the exposure, twice the possibilities right? WRONG. POF yielded me exactly 0 dates. And I think this message that I recently received from the creator of POF sums up why: 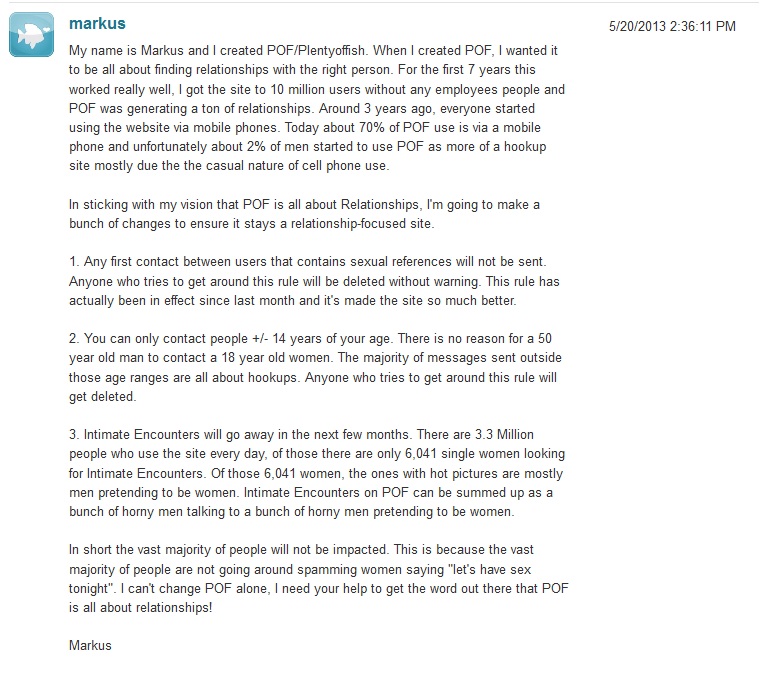 I have a few comments regarding this message.

1.  Either “2% of men started to use POF as more of a hookup site” is a gross understatement, or I only received messages from that 2% during my tenure on the site. I was propositioned a LOT.

If you wanted the website to be about Relationships (note the capital R he uses), then why did Intimate Encounters exist in the first place?

I had pretty much already decided to quit POF before I received this message, and the above was just the last nail in POF’s coffin. I previously chronicled some of the other things that contributed to me saying goodbye to the site, like the decline of good grammar and the guy who stole his cousin’s nylons.

Now, before you go and say, “But D, if you didn’t like the quality of the messages you were receiving, why didn’t you initiate conversations with guys whose profiles you liked?”, please know that I did. When I found a profile that interested me, I shot the guy a message. Some didn’t respond, and most fizzled out after a few messages back and forth. Like this guy, who pretty much insulted where I live 4 messages into our conversation: 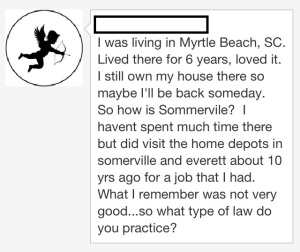 First of all, I hate Home Depot with a passion. When I was a kid running errands with my father, I quickly learned that “we just need to stop at Home Depot for 1 thing” really meant “kiss the next 2 hours of your life goodbye and then wait here with our 4 carts while I pull the truck around so we can load all this senseless crap.” When you say Home Depot, all I hear is “TORTURE.” So even though he admittedly had no way of knowing it, things had just taken a turn for the worse with the mere mention of Home Depot. Second of all, you’ve only been to the Home Depot in Somerville, but you’re judging it anyway? The Home Depot is sandwiched between I-93 and some MBTA tracks. Of course you didn’t see anything awesome. Somerville has a lot of cool and fun things to offer, like our movie theater that serves beer and wine. But I’m not going to defend it to some asshat who admits he hasn’t spent much time in the city I chose to live in and then insults it anyway.

The message that finally sent me over the edge was received a few hours before I got Markus’ terrifying message relaying the truth about Intimate Encounters. The sender? One of those 2% Markus mentioned. A JT and/or Ashton wannabe. (I would like to note that I have not actually seen either of these movies, despite my girl crush on Mila and my deep affection for Natalie’s emotional turn in Where the Heart Is. I have a very discerning taste when it comes to chick flicks, what can I say? But I’m pretty sure we all know how they ended – opposite from the reality of most who try to pull this kind of thing off…) Anyway, Mr. Emotionally Unavailable sent this my way: 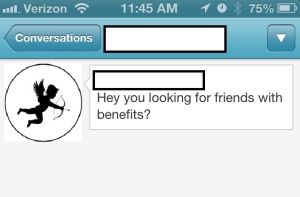 And finally, though the ads that are featured at the top of the site weren’t a reason I deleted my profile, they certainly didn’t help POF’s cause:

So, I quit POF. And bit the bullet by joining a paid site in its place: Match. I’m keeping my OKC account because it’s free and not nearly as creepy as POF was. In theory, the people who shell out money to be on a site are probably more in line with what I’m hoping to get out of online dating. Which, spoiler alert, does not include contracting a VD after a one night stand or wondering why all my tights keep disappearing.

So, dear readers, you may have noticed that I haven’t been posting any date stories lately. And this is a dating blog after all, so what’s the deal? Well. I wish I could say it’s that all my dates recently have been with cool guys and they went really well (and thus weren’t blog worthy). But I can’t say that. The real reason is that I have not had a conversation with anyone worth meeting in person in awhile. Discouraging, yes. Blog worthy, most definitely. So today, we have a Message Monday on steroids, if you will.

These have been some of the recent interactions I’ve had:

1) This fine fellow had messaged me and then talked about the weather (literally). And, at one point, in response to a sarcastic question by me to spice things up, he honestly stated that he thinks the T is great. I don’t trust anyone who doesn’t harbor a healthy amount of hatred for Boston’s public transportation. So I was already losing my patience with this fool. And then, this happened: 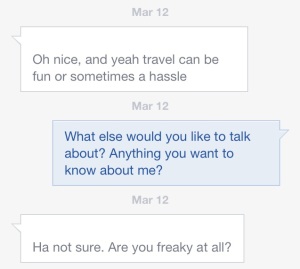 Excuse me? Topics we have covered so far: the weather, the T, the fact that you like pizza, and a trip you took to Puerto Rico. I don’t even know your name. You know nothing about me thus far, other than the fact that I would like to go to Puerto Rico because I have a friend that lives there. And the first thing you want to know about me is “Are you freaky at all?” Why are questions like this becoming socially acceptable?

I … I don’t even know how to respond to that. First, what other kind of fun is there? Second, and maybe I’m wrong, but I feel like what he’s really asking is “are you open to casual sex?” Again, WTF with this line of questioning? Third, emoticons. Sigh. The only thing I’m open to is ignoring you.

3) When a guy sends me a message on OKC, I obviously check out his profile, but I also check out his answers to all the user-generated questions. A quick crash-course in OKC questions. You can answer as many or as few as you want. But you can only see a guy’s answer if you also answered that question. And when you answer, you also indicate which answers you will “accept”, and which answers are “dealbreakers”. Whenever an answer is not one the other person would accept, it shows up in red. Two great examples (from the same guy):

This fine gentleman is unemployed. Times are tough, so you’ll notice that I’m ok with that answer. You will also notice that my answer of “I have a fulltime job” is unacceptable to him. Besides the inherent sexism or the fact that I will never be a housewife or stay-at-home mom (nothing wrong with that, just sooo not me), what exactly is your life plan sir? Because I’m pretty sure if you don’t work, and your partner doesn’t work, that pretty much leaves old refrigerator box down by the river as your only option. Oh wait, this clears things up for me a bit:

First – his answer of yes. Like I said, times are tough, so I can imagine scenarios where this wouldn’t necessarily scare me off, but as a general rule living with your parents sets off alarm bells for me. Are you unable to hold down a job, and thus unable to pay monthly bills? Do you have any life ambition? Does your mother still do your laundry? Is it your dream for them to build an apartment over the garage, so you never have to leave home? Etc. Second, my answer, the one that indicates that I’m a fully functioning, self-sufficient adult (haha, I can’t even type that without cracking up) with a job and an apartment, seems to be the opposite of what this guy wants. He wants me to still be living with my parents at the age of 28? I don’t understand. Aside from a whole host of more serious questions about this answer, if you live with your parents, and I live with my parents, where do we go to make out? The car in the driveway? Just – NO.

There’s no way I will date someone who thinks anything other than “it’s all fine by me” is an appropriate answer. There’s not really much else to say about this.

EWWWW. I feel dirty just reading that. Also, why are you adding extra letters to some words, and eliminating necessary letters from others?

6) This guy sent me a funny message related to my love of the Die Hard franchise (really all things Bruce Willis). But his profile was completely blank, with the exception of 1 picture. Where I normally ignore blank profiles, I decided to find out what the deal was. 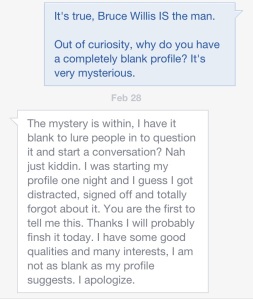 Why are boys so stupid? This is either 1) a really bad lie, or 2) you’re the kind of person who routinely starts things, but lacks the competence and/or focus to complete them. I’m leaning towards a combination of both, because you’ll notice that this conversation happened back at the end of February. As of 10:03 p.m. on April 7th, his profile is still blank. 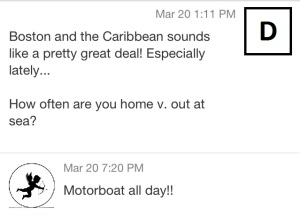 His profile mentioned that he’s in the Coast Guard stationed here in Boston, and his ship routinely patrols down in the Caribbean. I thought it was a totally normal question. What a delightful response. For a number of reasons, this one included, I should know by now to stay away from the Coast Guard. It’s my own fault.

Now – I said that I hadn’t had a conversation with anyone worth meeting in person in awhile. That’s not entirely true. There was one promising guy. C sent me a really funny message and seemed cool. But his profile said he was from Ft. Lauderdale. So I responded, and also inquired as to why he was messaging me up in Boston when he was down in Florida. He answered that he was in the process of moving up here. Ok, made sense to me. No point in meeting people in Florida if you’re going to leave, and why not get a jump on meeting people up in your new city? So the conversation continued, and C asked for my number. I gave it to him, and for a few days we texted (a healthy amount – it’s possible!). Then, this happened (please note the date stamp):

MAY? It’s early March! What the hell are we supposed to do until then? I mean, he seemed nice and all, but I can count on one hand the number of guys who could ask me out 2 months in advance that I would actually wait for. Sorry to break it to you C, but unless you’re really an undercover Ryan Gosling or Jack Reacher (the Jack Reacher in my head, not the Tom Cruise variety), you’re not on that list*. And I’m not looking for a pen pal either. So while I wouldn’t mind you looking me up when you do finally arrive in this fine metropolis, I don’t have time to chat it up with a total stranger 1,500 miles away for the next 60+ days. I’m super busy re-watching all 3 seasons of Veronica Mars in preparation for the new movie.

*There are technically two other individuals on this list, but a girl’s gotta have a few secrets, right?