Irrational fears seem to be a recurring theme here at StuCu, and this guy clearly knew how to jump right into my personal nightmares/psychoses… Can I just say:

I can’t even address what’s happening on his shoulder just yet, because OMFG, so let’s start with the dude. Look, I know this guy. The bow tie, the shaggy cut, the facial hair, the twee little accessory. I’m guessing he also plays the banjo and worships Ira Glass. 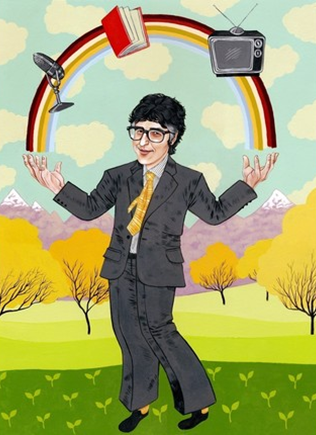 This is what I call a fancy hipster. Not to be confused with a dirty hipster, whose skinny jeans are covered in bike grease. A fancy hipster dresses in a jaunty fashion and has a fetish for inane, ironic objects. He might collect vintage badminton rackets. Or he might…

Now, birds I can actually handle, although neither of my co-bloggers can say the same (as previously noted, L and D’s bird phobias are no joke). You know what I can’t handle?

Creepy dolls. Look at that thing. If that doesn’t scream “I’m going to come to life in the middle of the night and kill you”, I don’t know what does. This phobia probably stems from the fact that my older cousin let me watch a movie called Dolls with him when I was around 7, and I’ve basically been sleeping with one eye open ever since. That also goes for puppets, mannequins, and anything that has the potential to reanimate and come after me. Also, this is not just any doll, it’s a fucking Pee Wee Herman doll. And I’m sorry, HOW TERRIFYING WAS PEE WEE’S PLAYHOUSE???

Seriously, that is some SINISTER. SHIT. I never watched that show as a kid, really because it was slightly before my time, and thank God for that. Luckily, I was born into a golden age of kid’s television instead:

Error: Twitter did not respond. Please wait a few minutes and refresh this page.