Hullo readers! Some updates from Washington, D.C., where I am pleased to report that more has been happening than me just hating on JDate. Well, actually, not a ton more. Mostly just me going on dates with Js from the site and then finding something about them to hate on.

Yup, hold on to your hat Tim Gunn, because there is a date post coming your way in a couple days, and it features  a whole litany of complaints, including some about what I consider one of most serious fashion faux-pas of our time.

Meanwhile, since I have your captive attention, I thought I’d use a few minutes on the mic to run an idea by you. What if: there was a way to discipline your dates and exes for not acting like they had any basic human decency or manners, without seeming like a total lunatic or having to bear the uncomfortable pain of conflict yourself?

I mean, if you’ve read this blog before, or ever dated for more than seven minutes, it’s abundantly clear that there are plenty of people who exhibit some pretty obnoxious or just plain mean and cowardly behaviors just lurking around on dating sites, waiting to pounce on a yet another sad, single victim. And I’m not talking about simple fade aways here. I’m talking about the more egregious stuff. For example, the unemployed former child star who shows up an hour late for any date that doesn’t involve a puppet. Or, the guy who strings you along for weeks, and then lets you know he has a girlfriend. Or the legit movie theater narc. The list goes on and on. Tonight, I had the (mis)fortune of running into one of Stucu’s worst offenders in the flesh, on my commute home. And that, my friends, is why this is on my mind.

Remember, J, the guy who had a girlfriend and knowingly let me use her toiletries to freshen up in the AM? Well, you probably don’t, but I do. As an avowed feminist, and aspiring bad ass, it KILLED me that I basically let this guy get away with 1) probably cheating on his girlfriend 2) lying to me and 3) making fun of the movie “Marley and Me, “which was actually REALLY EMOTIONAL AND MEANINGFUL. They loved that dog so much. And that dog loved them right back.

In fact, I’d be a liar too if I didn’t admit that over the past 6 months, there have been a few monologues rehearsed in my mirror where I tell J I know he’s a big lying cheater and that I have gonorrhea. (Don’t worry mom, I don’t have it. I don’t even know how to spell it. I had to use google because even my spell check doesn’t know how to spell it.)

Anyway, when I saw J today, getting off the metro. I totally froze:

I barely managed to give him my trademark side-eye glare before I actually quickened my pace and headed to the turnstile, even though at that point he fully turned around and looked at me. (When I got home and looked in the mirror, I sadly realized I was rocking a creative looking side part and had magic marker all over my hands. So I am kinda glad the confrontation didn’t go any further).

I mean, the reason why I didn’t say anything is the same reason I don’t implement many of my revenge fantasies, or give some of these fools the talking to they deserve. I didn’t want to be this girl:

However, my (well-advised) fear of conflict/humiliating myself means that J gets to walk around this earth (or to be less dramatic, NW DC) thinking that he can just be a douche and no one will care.

Now, enter the solution: the secret vigilante dating task force. What if, I could enlist volunteers (presumably other scorned, righteous ladies and the odd sassy gay friend or two, of course), to deliver anonymous hate telegrams to J and the other creeps that have come before and after him:

I mean, clearly leaving terrifying notes in someone’s home would be reserved for the worst level of offenders. But we could ask volunteers to implement a number of services, perhaps based on a sliding scale donation.

Back of the envelope calculations on pricing and services:

Clearly, all the deets aren’t figured out yet, but you get the gist. I’m basically the new Mark Zuckerberg. (After all, at one time in my life we sported similar haircuts. AND, we both like to sit at our computers and scheme). Instead of facebook, I’d call it HATESbook. (I realize that name doesn’t make a ton of sense, but I could resist the rhyme).

So what do you think ladies and gents? (Though mostly ladies, because if you haven’t inferred it yet, this blog is pretty biased against men). You in?

Oh be quiet, Emily Thorne. I think we can all agree you’re way more fun when you’re not sorry. Revenge can rock. Just ask these folks.

How are we doing out there, readers? Does everyone have a bleary-eyed, DST fueled case of the Mondays? Me too, friends. Me too. Well let’s take those feelings out on a total stranger, shall we?

As you loyal readers know, I’m seeing someone, but I’ve kept my Okc profile active for blogging purposes. I feel slightly sketchy about this, but D and I talked about it and he understands that my interests are purely professional/research related. As a certain hyperbolic but wise co-blogger of mine put it:

L: THIS IS YOUR CAREER

I have noticed recently that there’s a ‘seeing someone’ option that you can choose on your profile. The other day I clicked it on a whim, but I have to be honest, I don’t get it. What kind of weirdo would announce that they’re seeing someone on their profile, and then just stay on the site? (besides dating bloggers, of course.) I know, I know. The answer, obviously, is cheaters. Except if you’re in the market to step out on your S.O., why not just pull a J and lie about being single? Don’t misunderstand me; I’m not encouraging people to lie. Hell no. I just don’t understand the logic behind being perfectly willing to lie to your significant other but not to complete strangers.

Maybe I’m just super old fashioned/naive/jaded/need to read more Dan Savage. Maybe there’s a sea of people in open relationships out there, happily looking for some consensual, mutually agreed upon fun on the side via Okcupid. In which case, mazel tov! Truth be told, I have come across people in arrangements like that, but they’re always super up front about their unique situations on their profiles, I’m sure to avoid being thrown shade by people like me. So when that isn’t the case, and they don’t say a word about their ‘seeing someone’ or even ‘married’ status, I can only assume I’m dealing with a sketchball. Also, as we’ve experienced time and time again, the internet is full of liars. So there’s that.

I know, I know, I was technically lying for that month or so when I was no longer single and still on Okc as ‘single’. And my profile doesn’t explain my ‘seeing someone’ status either. I hear you. Good point. Huge hypocrite. That’s me.

Sorry, that was a serious tangent I just took you all on. What can I say? I’m easily distracted. In writing; in life.

Let’s move on, shall we? When I mentioned to D that I’d picked the ‘seeing someone’ option on my profile, he was confused.

D: But wait… won’t that prevent you from getting more crazy messages from dudes? Won’t they stop?

Me: I dunno. Maybe. Only one way to find out.

FYI, they did not stop. My message volume actually increased. I mean, the quality of the messages didn’t increase; if anything, that decreased, which I wasn’t even aware was possible given some of my past encounters.

Obviously, it’s Message Monday, so I have an example for you. I received a pretty standard one the other night, right as I was getting home from work. I clicked it open briefly on my phone to read:

I mean, certainly not the best message ever, but CERTAINLY not the worst. Semi complete sentences. Mostly correct spelling and grammar. Polite. Because I was heading out, I closed the Okc app for the time being, intending to reply later. I really do try to respond to anyone who writes me more than two words and appears to be reasonably sane, and tell them thanks but I’m just not interested. I think it’s only fair/polite, especially given the fact that I’ve been a non single person posing as single for the past few months.

Also, I didn’t forget to censor his profile pic; there was no need. More on that later.

Later that night, I noticed that I had a second message from the same dude:

What in the fuckity fuck? First of all, crazypants, less than two hours had gone by when you sent that. Some people have lives they’re trying to live. To quote a comedy great:

Second, I know all too well the experience of sending a message to someone you’re into and getting this response:

But that doesn’t mean I write a hostile follow up message to a total stranger an hour later calling them out like a mentally unstable lunatic. That’s not how this online dating thing works, because if it was, I’d have to quit my job to make time for all of the mentally unstable replies I’d be writing to people who were “very rude”.

Third, let’s consider the actual message sender for a moment, shall we? Take a look at his profile picture (his ONLY picture), which as I mentioned I’m able to show you all in its full, uncensored glory:

Real talk: that’s straight up the saddest excuse for a snowman that I’ve ever seen in my life. Here’s a tip: if you want to entice me with a snow creature, might I suggest this guy: 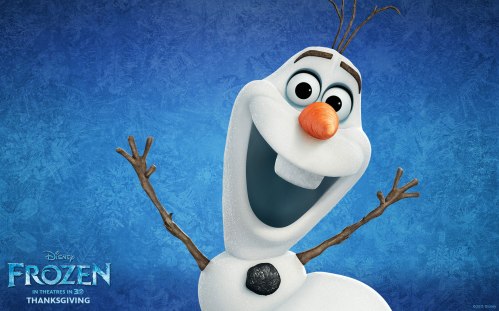 And the final thing I noticed about this dude, which brings us back to my rant at the beginning of this post:

Oh, cute! Adorable. Now my blood was officially boiling. I had to respond. And I did:

My original reply was littered with obscenities, but I decided that restraint would be more effective. I sent this knowing it was self indulgent of me and totally unnecessary, but I didn’t GAF. I reaaaaally didn’t.

I blame my blinding rage on behalf of women everywhere for the fact that I didn’t even put two and two together at first. Sadly, it only occurred to me as I was writing this post that this dude totally messaged me because my status is ‘seeing someone’, and he (fairly) assumed I was also looking for some fun on the side. Yup. That’s definitely what happened.

Lol. Oh me. Do I feel bad about sassing him? Of course not! He was still an asshole and he still deserved to be put in his place. I regret nothing. But maybe I’ll just go back to my good old ‘single’ status for the time being, so as not to attract and get into a fight with every cheating douchebag in the tri-state area. Good call, right?

Lady B agrees. It shall be so.