You guys. I hope you’re prepared to have a large chuckle at my expense, because boyyyy do I have a treat for you.

This is (to our knowledge) a first here at Stupid Cupid. Up until now, no one we’ve dated, as far as we know, has found, had access to, or read our blog. UNTIL NOW. Because (drumroll please)….

Someone I’m currently dating has found this blog.

You’re probably saying something like, “That’s funny! But come on, it’s not that bad. At least you didn’t write about him.”

Except OH WAIT. I did. Yup. Go back and read that little diddy about my first date with D, in which I called him a nerd, lambasted his Okcupid profile, and basically implied that he was a creepy stalker slash potential murderer. #facepalm

Allow me to start at the beginning, because this is truly a tale you all deserve to enjoy fully and in minute detail. I have been seeing D intermittently since our first date about two months ago. I didn’t mention him again after that post because honestly, I really do try to avoid writing about guys I go out with unless/until it’s over. For this VERY F*CKING REASON. But I made an exception this time since D was the one to break the the epic dry spell I’d written so much about.

As previously mentioned on my first date post, D works in IT and is essentially a doctorate-level internet stalker, which I respect. Or at least I did, when I thought the only thing he’d found was my last name via my LinkedIn profile. I told him about the blog almost immediately, but gave him minimal info. beyond the fact that it existed. And he never let on that he’d discovered it. UNTIL…

This past Sunday night, when D casually brought up that awful scorpion email we single mutants received from Okc a few weeks ago. You remember, the one I freaked out about? I responded with something like: “I know, wasn’t that the worst? I actually just wrote a rage-filled blog post about it”.

But something about the way D had brought it up made me pause. My Spidey senses were tingling. So I broached the subject…

As you can see, D never actually answered my question. My weird hunch suddenly turned to certainty, and then to straight dread. At this point I’m going to switch FULLY over to screen caps of our conversation, so you can live out the epic fail right there with me: 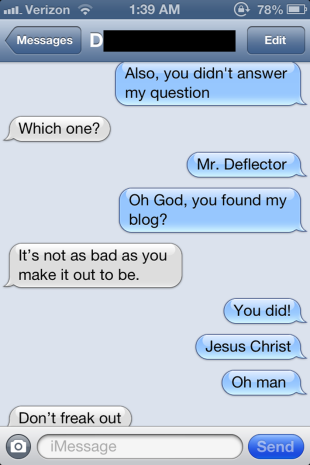 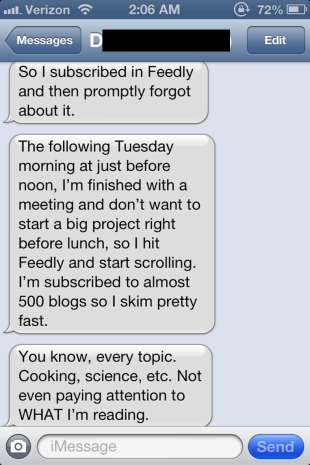 Speaking of going “Fuuuuuuuuuck” at high volume, while this was going down I promptly threw up the bat signal and woke poor L’s ass up:

Good co-blogger and friend that she is, she called me immediately and calmed me down. Meanwhile, D was finishing his epic tale of Stucu discovery…

After my initial shock/freak out, I started to process what happened, and I realized that D was actually being incredibly cool and gracious about the whole thing. Hypocritical as it sounds, I’m not sure I’d respond so kindly if I stumbled upon some blog post a first date of mine had blown up the internet with, especially if he basically reviewed me like a summer blockbuster and RATED OUR DATE on a scale of 1-10. Especially when D started referencing older posts of mine and I realized that he’d gone back and read our entire blog, from start to finish: 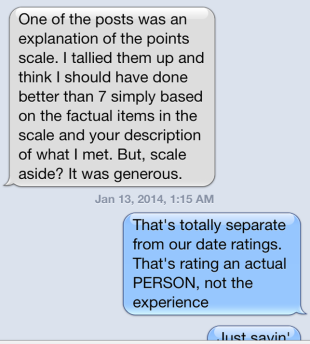 I’ll admit, the one thing I was annoyed with D about was the fact that he’d kept his discovery a secret. The fact that he’d known basically the entire time we’ve been going out and hadn’t said a word about it made me feel a bit like an idiot. But after he laid down his arguments:

I couldn’t really be mad. I would’ve done the same thing had I been in his shoes. All I can say is, thank God I kept my mouth shut for once in my life and stopped at one post!

Also, the bottom line is, this sort of thing comes with the territory. This is what we signed up for when we started a dating blog and put our shit on the internet. Anonymous or not, we knew this was always a possibility; I figured I’d be sharing the blog with SOMEONE eventually if we got serious enough. I just (foolishly) thought that I’d be in control of the when and the how of that reveal. Ahhh, how young and naive I was back then.

Not gonna lie, I can’t help but feel a liiiiittle bit like Bridget Jones when Mark Darcy finds her diary:

Luckily, I didn’t write that D acts like he has a “giant gherkin thrust up his backside” (don’t worry, he doesn’t), but Lord, do I feel Bridget’s horror and embarrassment in that moment. Actually, I think we all need to watch the following scene right now. Don’t ask questions. Colin Firth just makes everything better:

At least this whole thing didn’t end with me running down the street in gold zebra print knickers while a homeless man shouts after me in the snow. #smallvictories

Anyway, D continued to assure me that he was cool with the whole thing, and he was also super complimentary about the blog and our writing in general. Just when I felt my blood pressure return to a semi-human rate, another thought occurred to me: I wanted to write a post about this. I wanted to share this absurd hilarity with our readers, complete with our texts. Was D going to be cool with that? What was the protocol now that I knew he was going to presumably read every new thing I wrote? I asked him if he’d mind if I shared this story:

Allow me to sincerely apologize for the lack of consistent posting that’s been happening lately (and by “that’s been happening” I mean “will be continuing through this week”). I know what you’re thinking but I promise, we haven’t been spending all our time catching up on fall TV and shouting “TINA FEY, HAVE SEX WITH ME” while watching the Emmys.*

*S did in fact shout that exact sentence during the Emmys. Which she watched with her mom. Who spent most of the broadcast emphatically insisting that “Claire Danes is the worst.” I said all our time, thank you very much.

It’s true, the intoxicating promise of a new season of Nashville is a heady drug to three painfully single late 20-something women, but we promise we’re not abandoning you, not even for this goddess among mere mortals:

To put it plainly, shit has been cray. Additionally, D and I are both in a close friend’s wedding this weekend (YAY other S and guy S!) which is straight up going to be the party of the century (sorry/not sorry Kate and Wills). L will post this week if she has time, but either way I promise, starting next week we will return to a somewhat consistent schedule, filled with second hand embarrassment, poor grammar, and troubling selfies. Here’s a preview of an upcoming post of mine to whet your appetite: I’ve been seeing someone for most of this summer (who I actually mentioned on the blog before in a not so flattering way…oh me) and I broke it off with him last week. So you’d better believe I’m going to be dishing allllll about that fun experience as soon as I have the time to search for the proper GIFs.

Have a great week, boos, and we’ll see you next week with some fresh content!