Before we get to my post, just a quick blog announcement: since we started Stupid Cupid over a year ago, we’ve always referred to our dates by their first initial. This was easy and effective enough in the beginning, but it’s come to our attention that this practice is now confusing as shit. It’s simple math, really: there are a finite number of letters in the alphabet, and apparently an infinite number of douchey single guys. The longer we date, the more repeats we’re going to have. We can imagine what a pain it must be for you guys to keep everyone straight while reading about our shenanigans. I mean, I recently dated a D, and then co-blogger D dated a D, and then both of those Ds dumped us. It’s like a 21st century Abbott and Costello routine. So, to quote my co-blogger:

D: TOO MANY D’S UP IN HERE – WE’RE SWITCHING TO NICKNAMES

Damn straight we are. From this point forward, all new dudes we go out with will receive a nickname, probably based on a noticeable characteristic or a funny anecdote, but I make no promises as to the consistency (or, frankly, the fairness) of our naming practices. To avoid further confusion, dudes we’ve already written about will still be referred to by their initials; as you’ll see below, D who dumped me is still D (you narrowly missed receiving a nickname containing the words ‘nerd’ and ‘stalker’, sir. You’re welcome.)

We hope this will make things less confusing for you guys, and we’re pretty sure this nickname thing will be an enjoyable practice for us as well. Spoiler alert: the first bachelor to have a nickname bestowed upon him is a guy co-blogger D went out with last weekend, and his nickname involves Japanese food. I assure you, the story behind the name is delightful.

The dust is settling on my break up with D two weeks ago. I’m still processing things, but that initial sting of rejection (which was really more like a punch in the gut) has faded into something more like a dull ache. On a whole, I feel better, but that also changes day by day (and even hour by hour). Last week I was feeling really good about the whole thing; almost obnoxiously so. People were like, wow… you seem to be doing great! And I was all…

Yes, I saw the Lego movie. I told you, I dated a nerd for months.

Anyway, last week everything was awesome, because the weather was gorgeous and I had a ton of fun plans to distract me. This week, it’s been torrential down-pouring, and there’s essentially a tumbleweed rolling across my Google calendar, so I’m a little closer to this than I’m entirely comfortable admitting:

I miss D, even though we’ve been talking. I promise you, “talking” is not a euphemism for anything. We’re genuinely trying to figure out this friends thing, which has been really nice in some ways but also confusing as hell, because I think neither one of us knows exactly how to act towards one another now. The boundaries are different, and the dynamics are different, and it’s…fucking weird. When we agreed to try to remain friends, I told him I reserved the right to change my mind at any point if I started to feel differently, and I’m still playing by those rules. If I wake up tomorrow and am all:

then we’ll call it a day. PS you might be interested to know the results of our little poll: 36% of you keep in touch with your ex(es). Okay, well that makes me feel a little less crazy for trying this. Then again, 33% of you answered “hell no”, so there’s that. Anyway, the experiment continues, and I will keep you all posted.

D also informed me last week that he read and loved both of my posts, which made me cringe ever so slightly. It’s one thing to know that he’s going to read them, and it’s another to receive actual confirmation that he did. After I published part 2 of my post, this fun little exchange occurred: 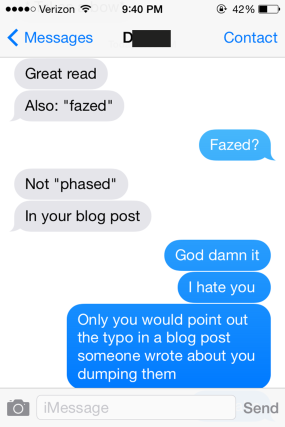 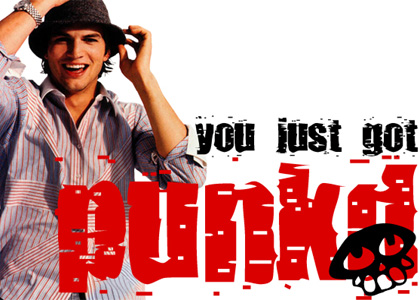 Is that the most Aspies thing you’ve ever seen in your life? WHO DOES THAT? I reminded D that I had been really understanding and gracious about the whole being dumped thing, but that that goodwill only goes so far. Translation: do not poke the bear. The dumped bear.

Even though my mood this week has been what some might call “unique”, I have had some time to get used to being single again. And while in some ways it sucks a big huge fat one and I hate the world, in others it actually doesn’t feel bad. It even has its moments of being (dare I say this on a blog where we complain about being single 24-7?) sort of nice. One thing I’ve learned about being in a relationship, even a good one, is that you invest a lot of time and emotional energy into another person and the relationship as a whole. This is/was wonderful in many ways, and in a great relationship what you get back in return of course makes all that effort more than worth it (ugh low point, I just mentioned ROI on our dating blog. Please accept my sincerest apologies). But this particular relationship wasn’t working towards the end, and in hindsight, I really did feel kind of drained, and also like I was neglecting myself a little bit. I’m not saying that D was needy or demanding or that this was his fault, because clearly it takes two to tango. I’m saying there’s a little bit of an exhale happening that I’m actually kind of enjoying.

So, with that in mind, I’m making a concerted effort to look on the bright side/think positively/not be a perpetual Debbie Downer about this break up. Even as I typed that last sentence, I secretly thought…

If you’ve been reading this blog, you know that positivity of any kind is a fairly foreign concept  around these parts. Be that as it may, I’ve decided to give it a try, because what the hell? Here’s how I’m looking at it: having more free time and freed up energy is an awesome thing. I have more time to do shit just for me, figure out what I want next in my life, chat up my friends more, maybe find a fun new hobby, write, and just…chill. I hope this doesn’t come off as some smug Eat, Pray, Love bullshit, because God I hated that book…

Basically I’m picturing the next weeks/months of my life as a breezy dream where this happens:

So… besides not having a house in the Hamptons, here’s the issue. You may recall that I stayed on Okcupid the whole time I was with D for blogging purposes. I changed my status from single to ‘seeing someone’ (which of course did nothing but attract cheating losers instead of single losers) but wasn’t talking to anyone. After D and I broke up, I changed my status back to single, because, you know, accurate. I expected to get a slew of visitors and an underwhelming flurry of one word or unintelligible messages from random douchebags, which don’t worry, I did. It didn’t occur to me for one second that I might actually get a good message, because, I mean, have you been reading this blog? Good messages are like unicorns: they’re rare, they’re mythical, and they appear to only exists in books, movies and our imagination.

You know where this is going, right? I got a good message. Actually, a great one. I clicked on the guy’s profile, half praying for it to be awful or illegible or insane. But of course, nope. At first glance, this looked to be someone I would be thrilled to go out with: smart, funny, interesting, and cute. You know, basically…

In my almost two year career as a part time online dater (and full time pessimist), I’m pretty sure I can count ON ONE HAND the number of times I’ve gotten a really good message from someone with a nice, normal profile who was also taller than me and appeared to be cute. Dismayed, I sought L’s sage advice. We decided that my options were:

Option 1 was vetoed immediately, because hi, do I have to make that stupid unicorn analogy again? I’ve seen the dating pool, and let me tell you, shit is rough. I wasn’t about to ignore something promising just because of bad timing.

Option 2 seemed to be the most up front, but something about laying my sad breakup story, even a super abridged version, on a total stranger screamed bad idea/wild over share. Also, one message from someone is absolutely no guarantee that you’ll receive a second, and I decided if I bore my heart to this dude and he didn’t respond, I might ACTUALLY kill myself. Mama can only take so much rejection. Thus, Option 2 was vetoed.

Which left… write back normally and see what happens. I did, and I got a response, another great one. At that point, it was actually surprisingly tempting to just say fuck it, keep a back and forth going and see what it led to. I mean, flirting is fun/boys are cute/distractions are tempting/validation is intoxicating, particularly after you’ve been rejected.

Don’t worry, I quickly came to my senses.

I knew, deep down, that if I pursued this dude or frankly any dude right now, it would be 1. way wayyyy too soon and 2. for all the wrong reasons, namely a distraction from the D stuff. I’m in no way ready to get involved with someone new, and also, the last two people I’ve been involved with had both recently gotten out of super serious relationships, and that turned out to be the source of most of our problems. I mean hello, I got dumped in part because D still had feelings for his ex, so I have firsthand experience with people who jumped back into the game too early, and it’s not something I want to perpetuate. So…

I sent the cute guy another message, laying it all out there, and asking if I could contact him when I was ready to date again. To which he said yes. I don’t know when that will be, exactly, but for now I’ve got plenty of DVR and dreams of channeling The Barefoot Contessa to keep me occupied.