S here, coming at you with my last post as a 28 year old. That’s right, peeps. As of midnight tonight, the sun will officially begin to set on my 20s and I’ll be staring 30 in its mean, spinstery face. Woohoo! Also, a friendly reminder: if you haven’t already, please vote for your favorite worst date ever story here. Voting ends Friday!

Speaking of being a mature adult… do any of you loyal readers recall this lovely tale of first date tipsiness from L? Well last week, as I mentioned, I walked (or should I say stumbled) a mile in her shoes on a first date of my own. Allow me to explain, and by explain I mean post a screen shot of the text I sent D when I got home: 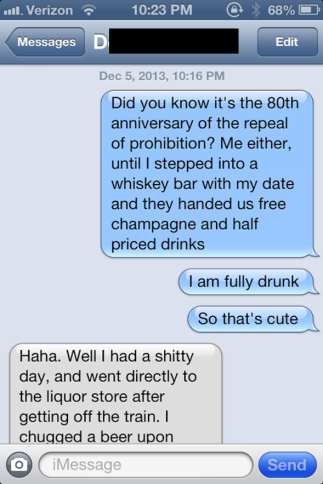 It’s a testament to our friendship and to the bond we share that D a. did not bat an eyelash at the fact that I got drunk on a first date and b. was on her way to getting sauced herself after a rough day at work. Meanwhile, somewhere south of us, L was also out drinking heavily. Can you say cosmic connection?

Anyway, a little background on said date. The guy is M, a 36 year old high school teacher from Jersey. M and I had been messaging back and forth for a a few weeks. Things I liked about him: he’s an avid traveler and spends every summer at his family’s beach house in Italy, traveling all over the country and throughout Europe. Yes, you read that correctly. Summer beach house. In Italy. Um, hi. Sign me the f*ck up for that. He also teaches history, which is hot. And is 6’3. HOT.

Things I wasn’t crazy about: he tried, from the moment we exchanged numbers, to CALL ME. There are few things I hate more than a phone conversation with a dude I’ve never met. I mean, what kind of sociopath wants to voluntarily talk on the phone with a total stranger, unless that stranger is a Comcast customer service team member and the cable is out? Even when the guy has a delicious British accent, it’s still inevitably the most awkward interaction ever. I successfully dodged the first few of M’s phone requests, hoping he’d take a hint, but he KEPT ASKING. I had to actively restrain myself from pulling a Regina George and shutting his Gretchen Weiners bullshit right down:

And then send him this insane little memo just in case he still didn’t get it:

Instead, I consented to 20 minutes of chatting the night before our date which was, AS PREDICTED, moderately awkward. I hate being right all the time. (Lies. I love it).

The night of our date rolled around, and mama was pretty grumpy. Here’s why:

I was just not feeling it. It was one of those days where I I wanted sooooo badly to go home and lay on my couch (aka pretty much every day), but I hate people who flake on plans last minute (ahem) so I dragged my salty self over to the bar.

How did the date go? Glad you asked. Conveniently I text-vomited a full summary to poor, unsuspecting D, which I will again post for your viewing pleasure: 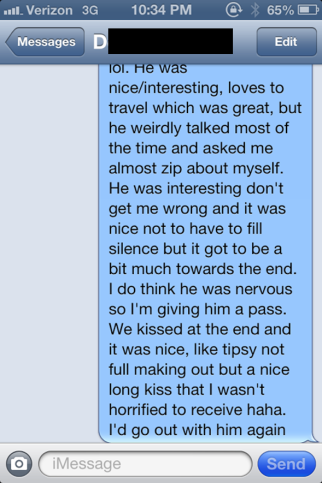 In case you haven’t noticed, yours truly is quite the drunk texter. I recently claimed (to no one who cared) that I live by the following motto: “When the drinks start flowin’, the fingers get goin’.” I mean, what? Also, it’s almost too easy, but…

Sorry/not sorry. Back to the date. I swear, I have never had my ear talked off by a man like I did with M. From the moment we met he was a Chatty Cathy, going on and on about his job, traveling, friends and family. This was actually a welcome development at first, since I usually have the EXACT opposite problem with dudes and have to essentially perform my own one woman show just to keep the awkward silences at bay. So honestly, up until the end of the night I truly enjoyed M’s chattiness. He was smart and interesting, not obnoxious or annoying.

It wasn’t until we arrived at the aforementioned whiskey bar and I was well on my way to being fully drunk that I realized… M had asked me almost nothing about myself. Literally almost nothing. In all fairness, I’m not exactly a shy wallflower (shocking, I know)  and can hold my own in a conversation, so there were plenty of times when I interjected with something and M listened with interest. So I guess it wasn’t that bad, just… weird. Anyway, on to my drunkenness. We had already had a flight of (delicious) beer at the first bar we went to, and then after revealing to him that I’d recently acquired a taste for whiskey, we decided to trek down the street to a whiskey bar for a “nightcap”. Except we walked in and it was like a budget remake of the Great Gatsby up in that piece. Champagne was a-flowin’. People were dressed in period garb. The normally wildly over-priced drinks were dirt cheap. You can guess what happened next…

Mama got sauced. M had to drive and is also gigantic in stature, so he was essentially fine, but I had 3 more BIG mixed drinks and a glass and a half of champagne. By the end I could hear myself slurring my words and also started to make best friends with our neighbors at the bar, something I only do when drunk. At one point the nice lesbian couple next to me discretely whispered, ‘is this a first date?’ and I practically shouted, so the entire (tiny) bar could hear, “It is a first date! Are we that obvious??” Smooth, S. Smooth.

Smart cookie that I am, I decided that we needed to go before I (further) embarrassed myself. I could at least tell through my haze that M seemed bemused rather than horrified by my antics, so I was confident that my behavior still passed for charming and hadn’t crossed over to fully obnoxious. Yet.But I calculated that I was roughly 15 minutes and half a drink away from this:

I announced that M needed to drive me home (in hindsight I was in no state to accept a ride from a strange man but hey, I obviously lived to tell about it. Calm down, mom.) M said he had a great time and would love to go out again (heard that one before!) and then went in for the kiss. It was a bold move, but drunk S was into it. It was actually a really nice first kiss, probably because we were in a warm car and I had a buzz on. But nice nonetheless.

The next morning, hungover and a little embarrassed, I went over the date in my head. And started to get annoyed by M’s apparent lack of interest in my life. I called in some experts, wondering if this was a red flag, but multiple sources told me he was probably either a. nervous (this seems most likely to me) or b. having a REALLY good time and was comfortable enough to open up. Either way, he didn’t berate me or lose his car, so I’m giving him a pass.

M and I have a second date set for Thursday. Let me tell you, there are few things more awkward than dating someone new right around your birthday. You feel like a weirdo not mentioning it at all, but you don’t want them to misunderstand your mention as a request for them to acknowledge it. I am probably ultra sensitive about this because last year I was in this very same position… I’d been seeing a guy briefly, it got out that it was my birthday, and he made a big fuss about it. Basically he INSISTED that we go out to dinner to celebrate even though I was super uncomfortable and told him ‘yeahhh we’re not seriously dating, that is sweet but really not necessary’. But again, he insisted, so I relented, thinking I’d at least get a nice dinner out of it. Then, the night of said dinner rolled around (also the day after my bday!) and this douchenozzle texts me to tell me 1. he was cancelling dinner and 2. didn’t want to see me anymore. Like I’m sorry, WHAT? I NEVER WANTED TO HAVE THIS WEIRD BIRTHDAY DINNER IN THE FIRST PLACE, YOU LUNATIC.

Anyhoodle. Clearly I have birthday date PTSD after that bullshit. So when M (very nicely) referred to this next date as my ‘birthday dinner’ I practically shouted him down in sheer alarm in distress. I just feel like I’m tempting fate by agreeing to this again, even if it is just dinner and even if I SCREAMED that I didn’t want any sort of fuss made over my birthday by someone I literally just met. Let me tell you, if M cancels, you poor readers WILL be hearing about it. Probably in all caps.

Date rating: 7.5/10. M was a nice, interesting, smart, fun dude and a great kisser, but he talked wayyy too much.

Lesson learned: DRINK LESS. That is all.