Remember when I promised you that, if you suffered through my JDate hate manifesto, you’d actually get some stories about the guys I met on it? Asked and answered, friends. ONLY A MONTH SINCE THE POST. #trulysorry

I actually had a nice time with two of the guys I met on JDate, and both managed to keep me occupied through the late summer/early fall. I’ve already divulged the details of one of those flings in a nice, sobering post about being an adult and “doing the right thing.” and I figure it’s time to share a little bit about the other guy, whose story is much less savory, and much more juicy. (Ahem, mom and dad, this is where you stop reading. You’ve been warned.)

…andddddd that’s about it. This guy, during our first date, was so boring, that he literally recited two recipes verbatim, including an ingredient list for each. He spent the other 50% of the date just explaining, in frame by frame detail, episodes of Friday Night Lights. In a normal situation, I would have ended the date after one drink. But here’s the thing. He was super cute. And we were obviously really attracted to each other. And he was putting some pretty cute moves on me.

So I took him back to my place (a 20-minute walk from the bar, during which, between groping me and weirdly trying to hold my hand, he detailed several episodes of “How I Met Your Mother,” told me a really really long story about no less than 12 different friends of his from camp who I did not know, and then proceeded to recite a recipe for matzah ball soup) and we did it.

This was the night when I truly discovered what it means to have a sex idiot.

Once again, we can thank Tina Fey for another genius contribution to modern society. For those of you who didn’t click on the hyperlink above, allow me to summarize/elaborate. There is a great episode of 30 Rock where Jack and one of the many women he is dating run into each other. They’re both with other people, who turn out to be really dumb human beings who they are both keeping around for the sex only, who they refer to as “sex idiots.” God love ya, Jack Donaghy, for always reminding me there is always room to grow into a WORSE person.

Now friends, if you can believe it, It gets even better. Because Zarina’s sex idiot is no one other than the incredible swimmer/media sensation/fashion designer, Ryan Lochte. If you’re joining me in uttering, “Yum/Yuck,” then welcome to the club. That’s a sex idiot for ya. Lust them and hate them. Fantasize about having sex with them but can’t wait to kick them out afterwards.

So back to S. If you’re looking for a visual, imagine a Jewish Ryan Lochte who is really obsessed with his mom: 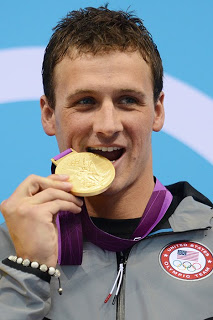 (BTW,  S and D, we should really invest in Photoshop so I can do cool things like put a yarmulke on this picture of Ryan Lochte nibbling a gold medal).

After my first date/night with S, I figured I probably wouldn’t see him again. After all, we didn’t have a lot in common, and I pretty much handed him his shoes and pushed him out the door shortly after the dirty deed was over.

However, S continued to text. And I continued to answer, and agree to hang out, as long as the plans we made maximized the sex and minimized the talking. (i.e., no meals, no day dates, hanging out exclusively at our apartments, etc).  This pattern, much to my delight, continued for a month or so.

HANG ON THERE GRYFFINDOR. Before you get on your high hippogriff, and look down on me for being a shallow user, let’s engage in a real intellectual debate here: Is it wrong to have a sex idiot?

Before fully examining this question, I think it’s important to further examine the origin and reach of sex idiots. So, I turned to three important cultural hallmarks: Sex and the City, rap music, and B-list rom coms that often appear in my Netflix cue.

1) SATC has long explored and acknowledged the concept of the sex idiot, which the lovely ladies usually refer to as a “F#@$ buddy.” They even have a whole episode dedicated to  the concept:

According to this incredibly believable scene (when was the last time you saw four people have a full on conversation during the middle of yoga class?), a F-buddy meets the following criteria:

Now, here’s the thing. It sounds very much like these are all consensual arrangements, where each party is explicitly aware of the intentions of the other party. It’s not like these guys are begging for relationships, and all these ladies are giving is sex. If both parties are 1) informed about where they stand and 2) happy about it, then what’s the harm in having a little fun?

2) Now, let’s get even more urban (I know, what is more urban than SATC? It’s in a city, for goddsakes!) Enter, the rap song and the “jump-off.” The jump-off is a term that some of these rap kids are using to describe a lady who men use for casual sex.  Jump-offs truly penetrated the vernacular as after the 2003 release of Joe Budden’s hit single, Pump it up.

Budden describes his Jump Off:

Sure, this song has misogynistic undertones (BLOG GIVEAWAY FOR ANY READER WHO JUST GOT THE HIDDEN POP CULTURE REFERENCE!)* but, at the end of the day, Joe is describing a pretty cool gal, who is low maintenance, fun, and amiable. Moreover, his description transcends race and class. He could very well be describing Carrie, Miranda, or Samantha. It sounds like not only would all these things be fine with them, but that they would  alsorevel in and appreciate the lack of communication, interest, or attention from their F-buddy until the desired time to F.

So far, so good. Sex idiots are not only perfectly fine to have, but they are also recognized by HBO and the same label that produced Jay-Z. Sounds legit and ethical to me!

3) However, the string of B-list rom coms I’ve seen suggests that the sex idiot/F-buddy/jump off concept has a fatal flaw. And that flaw is, if one party is interested in any more than sex (their opinions being heard, the life details being shared, a gift on Valentine’s Day), then all bets are off and someone could really get hurt. This is what happens in the Justin Timberlake and Mila Kunis tour de force film, “Friends with Benefits,” when one of them becomes more interested than the other. (Y’all, this is movie is seriously good. If you don’t believe me, believe Rotten Tomatoes.)This central conflict repeats, though less successfully, in several films, including “Just Friends,” and “The Hook Up” Of course, at the end of each movie, the main characters find out that they are not truly one another’s sex idiots, but actually like each other, and kiss on a bridge or something while Jason Mraz plays in the background. But the main takeaway I had here was: in a true sex idiot arrangement, neither party can romantically like the other party. Or the whole thing will be a mess.

So what happened to me and S? About a month in, S suggested we go on a proper date, to DC Restaurant Week. Now, everyone knows eating dates are a huge, intimate step for me. And I was pretty panicked about what S and I were going to talk about for one hour. But, I figured there was no harm in a meal  and I obliged.

And, I actually had a decent time. After the date, we went back to his place, and he asked me to spend the night (a “no no” for jump-offs!) and we did engage in some couch cuddling and I wore his pajamas and blah blah. And you know what? After a very nice night and morning, I never heard from him again. (OK, that’s not entirely true. I hit him up a week later for some late night lovin, and he said he was tired and I never heard from him again.)

I wasn’t that broken up about it. He was definitely not “the one,” and, truth be told, I was running out of physical cues that I could use to feign interest when he was talking. Moreover, he and I had never explicitly defined our sex idiot partnership, and therefore, it’s quite possible he wanted more/less and was sick and tired of just hanging out every time I saw a really sensual episode of the Good Wife and needed to blow off some steam. Who knows?

My point is. Pop culture is always right. Keep sex idiots around purely for sex. Don’t try to blur the lines. Unless, of course, you’re Robin Thicke featuring T.I and Pharell:

Sorry I’m not sorry readers. That song is catchy.

*The blog giveaway is NBD. When these posts get published into a book, you’ll get a free signed copy. Now all we need is an agent. Sigh.

7 thoughts on “Sex Idiots, Jump offs and others: The Second S”